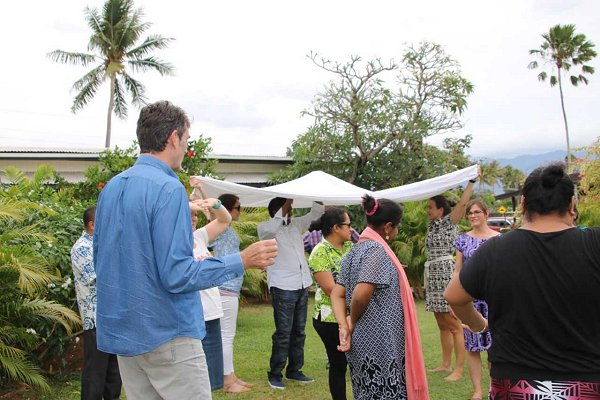 A global El Niño watch is currently in effect and the workshop was seen as timely since this could have potentially severe, but opposite, effects in different parts of the Pacific region.

El Niño tilts the odds in favour of drought or prolonged dry conditions in the south-west Pacific, but towards wet conditions and higher sea-levels in central Pacific countries like Kiribati and Tuvalu.

‘If we combine traditional knowledge
with scientific information, it can act
as a trigger for communities to act early’

Fiji itself is currently facing a prolonged dry spell and early-warning information on drought recently became more accessible there and in other Pacific countries through a new early-action rainfall watch.

Until then, explained Fiji Red Cross Society disaster manager, Maciu Nokelevu, at the forum, “I didn’t really know how to interpret the climate information available.

“Now I understand when a drought is likely and I can explain that information to communities in terms they understand.”

But drought poses unique challenges with early action due to its slow-onset nature: “It can be difficult to support communities to prepare before drought impacts start to happen,” said Mata Hetland, a disaster manager with the Cook Islands Red Cross Society.

“Usually it’s only when we’re already seeing the impacts like people running out of water that we act.”

Inexpensive low-tech strategies for Red Cross volunteers, plans for local early-action, and better use of scientific climate information were among solutions identified by disaster managers at the forum.

“Sometimes people want to act only when they can see a problem coming,” said Lussinda Nawayap, a disaster manager with the Papua New Guinea Red Cross.

“So if we combine traditional knowledge with scientific information, it can act as a trigger for communities to act early.”

The IFRC and the Climate Centre together framed an interactive agenda for the Fiji forum, including a “human ENSO exercise” in which participants acted out El Niño/La Niña impacts on Pacific trade winds, sea and atmospheric temperatures, and rainfall.