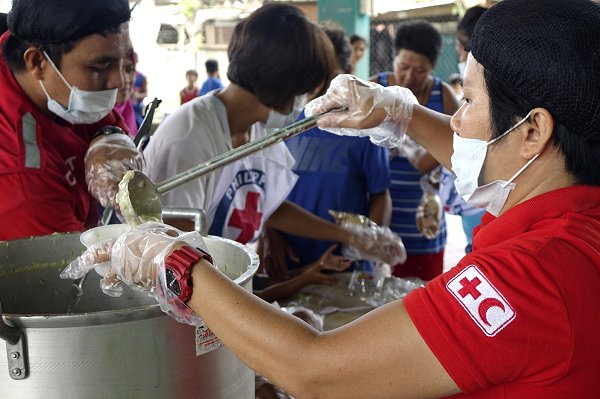 (This story is a press release issued by the IFRC earlier today jointly in Manila and Kuala Lumpur; currency amounts are here given is US dollars.)

More than 660,000 people in the northern Philippines have been picking up the pieces after devastating Typhoon Mangkhut.

The storm, known locally as Ompong, is the strongest recorded anywhere in the world in 2018 and struck the north-eastern tip of Luzon in the early hours of 15 September with wind gusts of up to 285 kph.

While its full impact is still being assessed, helping people rebuild or repair their homes and restore their incomes are already emerging as clear priorities.

“As the clean-up begins, we’re worried how families will cope over the coming weeks and months. Their income from farming and fishing will be drastically reduced, making it almost impossible for low-income families to repair their homes or even feed their families. That’s why our focus is on supporting them to recover, with dignity.”

Mangkhut struck just before the fall harvest, affecting more than 80 per cent of corn crops and causing damage to agriculture estimated at US$ 50 million.

More than 110,000 people who rely on fishing were also affected.

The IFRC and the Philippine Red Cross have launched an international emergency appeal, seeking US$ 2.7 million to assist 100,000 people for 12 months.

‘Our focus is on supporting them to recover,
with dignity’

Announcing the appeal, Chris Staines, Head of IFRC’s Philippines Country Office, said: “The situation continues to evolve, and more information will emerge in the coming days as assessments continue. But we already know there is a need for a substantial humanitarian response to help meet people’s immediate needs.

“We know disasters can make life especially difficult for some groups, so we’re putting in place measures to protect a diverse group of people, including children, women-headed households, men and boys made vulnerable by the disaster, people with disabilities and older people.

“For example, women Red Cross volunteers will carry out assessments and distribute emergency items to make sure we meet the needs of vulnerable women.”

The IFRC has already made available about US$ 480,000 Swiss francs from its Disaster Relief Emergency Fund to support preparedness and response efforts.