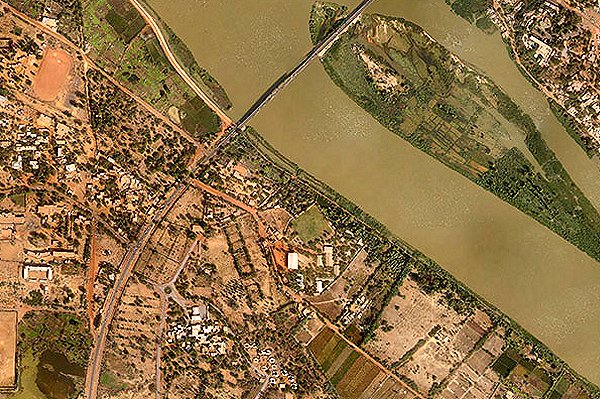 (This story is an unofficial translation of a report that appeared in French late last month on the website of the World Bank.)

For thousands of years the River Niger has been the socio-economic ‘lung’ of Niger and its neighbours in the river basin. But while the huge waterway allows many Nigeriens to feed themselves, providing water and livelihoods, it also poses a serious risk of seasonal flooding.

In the third quarter of 2017, for example, massive floods after heavy rain killed more than 50 people and displaced nearly 200,000.

Straddling the river itself the capital, Niamey, is particularly exposed to flood risk (photo), exacerbated by poorly planned development that has contributed to soil degradation and erosion.

Added to this is the demographic growth of many neighbourhoods in the city, which today has more than a million residents but no adequate drainage infrastructure.

To address these challenges, the Niger government – in partnership with the World Bank and the Global Facility for Disaster Reduction and Recovery (GFDRR) – has stepped up efforts to systematically collect data on exposure and vulnerability of Niamey to flood risk.

The object is to allow the authorities to better anticipate and prioritize investments to prepare the capital for floods.

The initiative began in 2017 when local volunteers, mainly students and young professionals from OpenStreetMap Niger, used an open-source mobile application to create a database of people and assets exposed to flood risk.

To date, the team has collected more than 15,000 data points on households and infrastructure in the city.

Since then, a Nigerien start-up, Drone Africa Service, has trained government officials and OpenStreetMap to use drones to gather high-resolution images of areas where people and assets are located.

With other partners, Drone Africa Service analyzed these images, combining them with the database to model the flood risk faced by the most vulnerable communities in Niamey, and this will be shared online by the government.

“I’m proud that a good number of students and professionals have participated in our training,” said Fatiman Alher, moderator and trainer of OpenStreetMap Niger.

“My dream is to see Nigeriens and Africans create a cartography and database on their environment, accessible to all.”

Thanks to a combination of OpenStreetMap, drones and modelling, Nigeriens are taking the lead in preparing Niamey for the next flood – an example of a sub-Saharan African country exploiting technology and innovation to be resilient to climate hazards (video).

The GFDRR and the World Bank have supported these efforts as part of the programme Building Resilience through Innovation and Open Data in Sub-Saharan Africa – an initiative funded by Belgium and additionally in Mozambique, Tanzania and Uganda.

In Niger, the work is aligned with the World Bank’s Disaster Risk Management and Urban Development Project as well as the African and Pacific CREWS initiative.