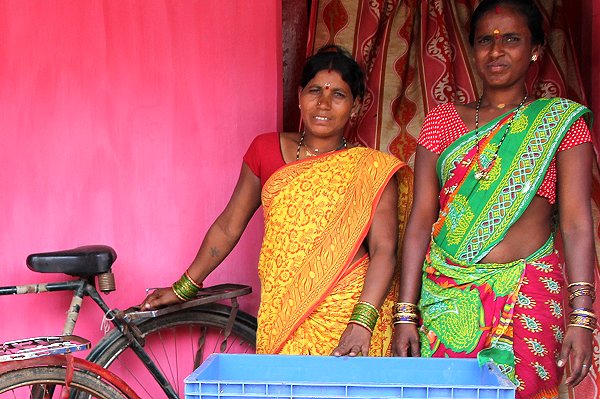 (Sanne Hogesteeger travelled to India as part of a visit to Partners for Resilience project sites in Odisha and Gujarat states by the PfR South Sudan PfR country team – two of the six states in which PfR continues to be implemented together with Bihar, Himachal Pradesh, Tamil Nadu and Uttarakhand. A similar visit was undertaken to the Philippines by the Ethiopia and Uganda PfR country teams, as well as field trips to PfR sites in Indonesia by the Kenyan and Philippine PfR teams.)

Ms Kamann, a mother of three, and Ms Boiday (photo) live in the village of Gokharkuda, Gopalpur district, on the coast of the cyclone-prone eastern Indian state Odisha. For them fishing is life.

The families rely almost entirely on both fresh and dried fish for an income that used, at least, to be adequate. But then things began to get more difficult.

For one thing, they say, the seasons have changed perceptibly and they notice more stormy days when the weather is too bad for their husbands to put to sea in traditional boats.

Even on days when the sea was bountiful and the catch good, there was no really effective way to store the fish and keep it fresh, which meant a lot went to waste.

Local women did not feel safe on the beach without proper bathroom and toilet facilities during the long hours it takes to process and dry fish properly.

And they learned to their dismay that wholesalers they were dealing with were not weighing fish fairly and undervaluing their catches.

Cue, in 2011, local PfR implementing partner, NetCoast, who came to Gokharkuda and mapped the challenges and risks people faced, also now including rising sea-levels, it was realized, and the consequent threat to sources of fresh water from salt-water intrusion.

With PfR support, NetCoast was able to provide advisory services that helped villagers access government schemes that would increase their resilience and the sustainability of their livelihoods.

As we found in the village when we visited, they now have a cold store for fresh fish, drying platforms close to the village, solar-powered bathrooms near where the women dry their fish, a new road to the beach, a reinforced embankment protecting their freshwater reservoir from the encroaching sea, and the beginnings of a protective mangrove buffer on the shore.

Besides these improvements introduced in the first phase of PfR, which have made a big difference to life, local women also got bicycles and storage boxes – one for fresh fish, one for dry – that have made them more productive (photo).

Today the local women’s group continues to work together to sell their produce and address the challenges they face, going to market as a group, for example, and bypassing middlemen: where they once got 20 rupees a kilo for fish they now get 50.

But it’s not all plain sailing, in any sense. Before we left the village, Ms Kamann said the weather has been very stormy recently, and no one can really do anything about that, short of investment in stronger vessels.

Her husband, who hears warnings of bad weather on local radio, has not been to sea for two weeks and they may have to start thinking about finding other sources of income if the weather doesn’t let up soon.

NetCoast workers told me they are trying to understand, and explain, what weather and climate projections indicate for their area; one new environmentally-friendly idea for diversifying livelihoods is mushroom farming.

As this story shows, resilience building is a long-term exercise and never stops. But when we look at the risks in a holistic way, we can have lasting impacts.

Ms Kamann and Ms Boiday with the bicycles and boxes for fresh and dry fish which they got during the first phase of PfR and which have helped stabilize their income. (Photo and Flickr gallery: Sanne Hogesteeger/Climate Centre)