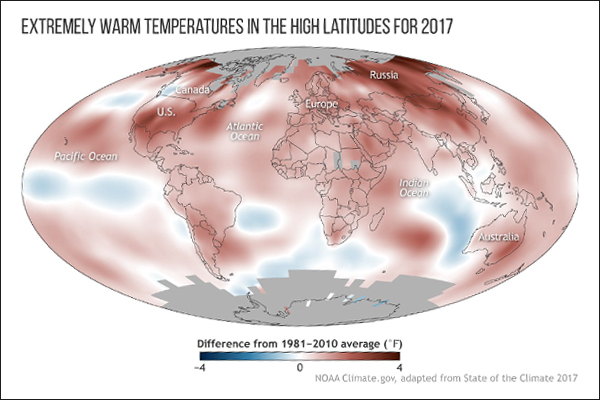 The new annual State of the Climate report from an international group of some 500 scientists says 2017 was – depending on dataset used – the second- or third-warmest year after the previous two since records began in the 19th century.

The report is coordinated by scientists at the US National Centers for Environmental Information and published by the Bulletin of the American Meteorology Society.

*The concentration of CO2 in the atmosphere is now 405.0 parts per million – the highest both in the modern 38-year record and in ice-core records dating back 800,000 years.

*Sea levels reached a new high at 7.7cm above the 1993 average, and they’re now rising at an average rate of 3.1cm a decade.

*Heat in the upper ocean hit a record high, reflecting the continued accumulation of thermal energy in the top 2,300 feet. (Surface temperature in 2017 was slightly below the 2016 value, but the long-term trend remained upward.)

“The global area of drought fell sharply in early 2017 before rising to above-average values later in the year,” the press release adds, while some coastal areas saw the almost complete eradication of coral reefs through climate-rated bleaching.

The 2017 State of the Climate report is published as a special supplement to the Bulletin of the American Meteorological Society. This is its 28th edition.