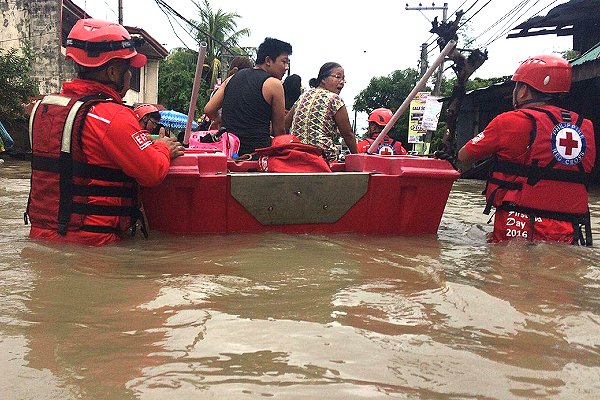 More than half a million people have been displaced, some of them forced to flee to temporary evacuation centres.

Tropical Storms Son-Tinh and Ampil (known locally as Henry and Inday) and an intense depression dubbed Josie hit the Philippines between 17 and 21 July – serving to exacerbate seasonal monsoon rain and causing major floods across 21 provinces in the north and centre of the country.

PRC Chairman Richard Gordon said the National Society would endeavour to reach 30,000 people in the hardest-hit areas, trucking in drinking water and providing healthcare, emergency-shelter materials and a wide range of other relief supplies.

“We will continue search and rescue efforts to evacuate families in high-risk areas and provide basic health and welfare services in evacuation centres.”

Damage to infrastructure and agriculture in the Philippines has been put at US$ 40m.

About 50,000 people were forced by monsoon floodwater to flee at short notice to improvised evacuation centres in schools, the IFRC statement said, but these are “cold, lack adequate water and sanitation facilities and can harbour standing water where mosquitoes breed.

Chris Staines, IFRC country head, added: “It is worrying that more monsoon rains are forecast in the coming weeks.

“More floods would be a double whammy for families already struggling to cope with this disaster.”

The Philippines is one of a number of Asian countries where heavy and/or continuous monsoon rain has triggered flood disasters in the past few weeks.

On Monday, the IFRC tweeted that with the monsoon in full swing the Red Cross Red Crescent is working 24/7 to “to give early warnings, evacuate people and respond in Bangladesh, Cambodia, China, India, Japan, Laos, Myanmar and the Philippines”.

The Lao government declared a national disaster after a dam was overwhelmed last week, flooding villages near the border with Cambodia where 25,000 people were also forced to evacuate to safer ground. “With infrastructure down and assessments ongoing, a full picture of the disaster is yet to emerge,” the IFRC reported.

The UN in Myanmar was following the flood situation there with “great concern” and was “mobilising its partners, resources and capacity” to assist the government, Knut Ostby, the resident coordinator, told Reuters.

“Many scientists agree that very intense rainfall as part of tropical storms and seasonal monsoons in East Asia is a key risk in a warmer world,” said Erin Coughlan de Perez, Manager, Climate Science at the Climate Centre.

“However, the storms that also aggravated monsoon rain in early July in China, for example, are not seen as becoming more frequent.”

Since 1 July alone, the IFRC has issued new appeals or DREF cash grants for the National Societies in China, Laos, Mongolia and the Philippines; there is also still grave concern over the vulnerability of people who fled violence in Myanmar now living in camps near Cox Bazar, Bangladesh.