Summer wildfires continue to cause havoc in northern hemisphere 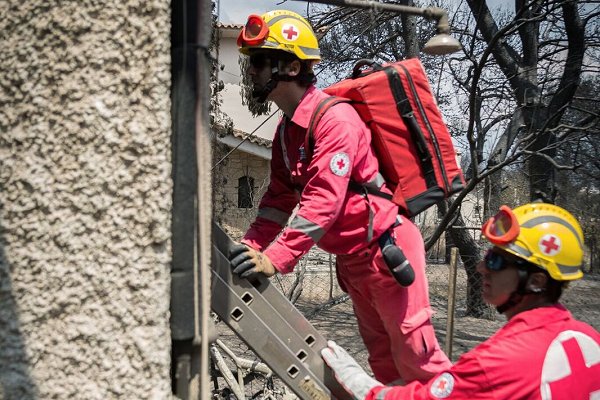 The Greek authorities this weekend raised to 88 the number of people who died in the wildfire in the coastal resort of Mati, in eastern Attica, while ten burn victims are still in intensive care in hospital, the national ANA-MPA news agency said.

The disaster is one of the worst of its kind in Europe since the Second World War.

Hellenic Red Cross personnel were continuing to operate in the affected areas and the National Society has set up a special bank account for local donations.

Greek Prime Minister Alexis Tsipras visited Mati today and met “citizens, civil engineers, soldiers, firemen and volunteers,” tweeting of his “immense respect for those that fought an unequal battle with the flames and now another for restoration”.

Greece last week suffered at least 14 wildfire outbreaks on three fronts, including the one that destroyed Mati, the IFRC said.

The severity of the disaster has been blamed on scorching temperatures and strong winds, as well as the high density of the forest in the affected areas, it added.

“Everyone involved will need long-term support to recover from what they have been through, and the Hellenic Red Cross and IFRC are working closely with the authorities to make sure they get all the support that they need,” said Georgia Trismpioti, the International Federation’s Athens-based senior humanitarian affairs officer.

The Greek fires are among several that have affected countries this month at the height of the northern-hemisphere summer.

The American Red Cross said Saturday that one “massive wildfire” in northern California has destroyed 44,000 acres and forced hundreds of people from their homes.

More than 600 displaced residents were being housed in four Red Cross shelters, and the National Society had other shelters, cots and relief items on standby.

US media reports said the fire, near the city of Redding, had claimed six lives.

Sweden last week also battled its worst forest fires for decades, and the Swedish Red Cross said a combination of very little rain and hot weather has placed many parts of the country at extreme risk; eastern Canada and Japan have also been struck by lethal heatwaves.

After examining historical data from weather stations in Denmark, Finland, the Irish Republic, the Netherlands, Norway and Sweden, World Weather Attribution scientists, meanwhile, said in a press release Friday that man-made climate change had made heatwaves in most of northern Europe “more than twice as likely”.

The WWA team, which also used computer models to assess the impact of climate change, “found that for the weather station in the far north, in the Arctic Circle, the current heat wave is just extraordinary – unprecedented in the historical record,” said Dr Geert Jan van Oldenborgh, Senior Researcher at the Royal Netherlands Meteorological Institute, a WWA partner agency.

The scientists cautioned, however, that the analysis was preliminary; it was being published before the end of the heatwave based in part on forecast temperatures.

They said it had been easier to estimate the twofold trend for the three more southerly stations – Denmark, Ireland and the Netherlands – where summer temperatures varied less.

“The logic that climate change will do this is inescapable – the world is becoming warmer and so heatwaves like this are becoming more common,” said Dr Friederike Otto, Deputy Director of the Environmental Change Institute at the University of Oxford.

“What was once regarded as unusually warm weather will become commonplace – in some cases, it already has.”

Establishing a direct link between climate change and wildfires, however, was not straightforward, according to Dr Van Oldenborgh.

“On their own high temperatures clearly increase fire-risk in the short term,” he explained today.

“But a wet spring, for example, might encourage vegetative growth in ‘fuel-scarce’ Mediterranean regions, making even a normal summer riskier than usual for fires.

“It may also be the case that drought in Scandinavia, which is actually against the climate signal, was a more important factor with the fires than heat, which has been exacerbated by global warming; we don’t know at this stage.

“Wildfires are always the result of a combination of things, and we’re planning more work on the net impact of climate change on the global risks.”

The WWA team now plans to publish their latest analysis and it will form part of a future in-depth study.