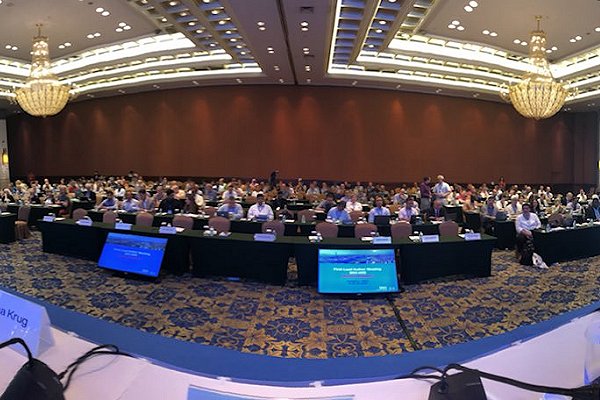 Lead authors from the IPCC’s Working Group I, covering the science of climate change, Friday ended their first meeting of the current assessment cycle in Guangzhou, China.

The bulk of the meeting (details), hosted by the Chinese government through the country’s meteorological service, was taken up by breakout groups focusing on one of the 12 chapters of the Working Group I report that will make up part of the IPCC’s sixth assessment of the global climate, ‘AR6’.

Chapter teams were asked to prepare “a detailed plan for an internal draft [report] due by 14 October 2018”, said Valérie Masson–Delmotte and Panmao Zhai, co-chairs of WGI, which covers the science of climate change.

“For the current assessment WGI is much more focused on science that directly helps us to understand risks and inform adaptation – connecting more closely than in the past with Working Group II, which deals with vulnerability, impacts and adaptation,” said Climate Centre Director Maarten Van Aalst, a current WGII author who is writing on identifying key climate risks.

“This suggestion of stronger interaction between the first and second IPCC working groups was also among the main takeaways of last year’s International Conference on Climate Risk Management [final report*], hosted by the Kenya Red Cross in Nairobi.

“That meeting produced concrete recommendations for AR6, including advice on risk, timescales and priorities.”

The Guangzhou session also encompassed an expert dialogue at Sun Yat-Sen University’s School of Atmospheric Science on regional climate change, involving some 200 scientists and researchers from all over the world.

This comes after and to some extent develops the recent IPCC expert meeting on regional climate information in Trieste, Italy, which integrated experts from all three working groups.

The IPCC issued the timeline for AR6 last September: the three working-group contributions will be released in 2021 and the synthesis report the following year, ahead of the first full global review of progress with the Paris Agreement.

The Climate Centre is contributing two other scientists to WGII: its Manager, Climate Science, Erin Coughlan de Perez, who will focus on decision-making options for managing risk, and its Pacific Climate Adviser, Olivia Warrick, who will look at the situation of small island states.

This October the IFRC has scheduled a special event in Geneva to coincide with the planned release of the IPCC Special Report on Global Warming of 1.5°C, known as SR15, highlighting the humanitarian impacts of continued global warming and the role of the Red Cross Red Crescent Movement in addressing them.

A draft of SR15 leaked to Reuters has had large-scale media coverage worldwide and says current government pledges in the Paris Agreement are too weak to limit warming to 1.5°C.

*A provisional version of this report was issued last year after the Nairobi meeting to inform AR6 scoping, but later revised slightly and now issued in final form.