EU to world: time for action on climate, security, peace 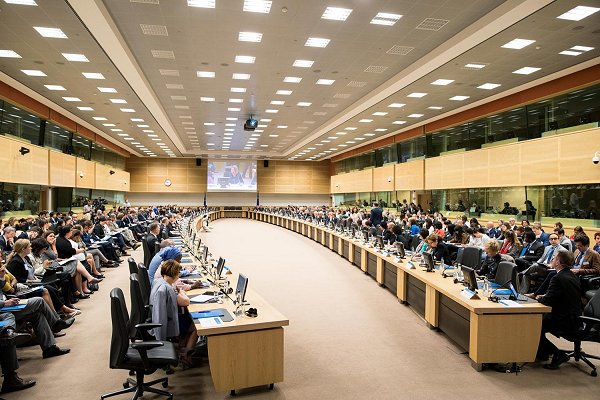 The ICRC Brussels delegation and the Red Cross EU Office took part in a major high-level event (photo) organized by the European External Action Service that “drove home both the urgency and importance of tackling the risks that climate change poses to security and peace,” the EEAS said.

“Ministers from around the world, top United Nations officials, and leading experts testified to the many real and potential security threats deriving from climate change,” it added.

The half-day session – Climate, Peace and Security: The Time for Action – was opened by the EU’s High Representative for Foreign Affairs and Security Policy, Federica Mogherini, who pointed out that “for the second year in a row climate impacts have displaced more people than war”; this reality, she said, remained “an untold story”.

She said that in the Sahel region of Africa, for example, “thousands of jobs are being lost because traditional agriculture is not sustainable any more”.

In the modern world “the only comparable risk [to climate change] is weapons of mass destruction”.

Investment in climate, said Mogherini, was a “hard-core security” issue.

Ovais Sarmad, UNFCCC Deputy Executive Secretary, also argued that there is a clear link between climate impacts and global security.

“Climate change acts as a threat multiplier, making many of the biggest challenges humanity faces even worse,” he said.

“The way forward is for the world to deliver on the promises contained in both the Paris Agreement and the UN’s Sustainable Development Goals.”

In her remarks to the Brussels session, Swedish Foreign Minister Margot Wallstrom said: “Floods and droughts force people to flee; they affect food security and livelihoods.

“Island populations’ entire habitats are disappearing. We must develop our tools and invest in climate action.

“The UN must step up and lead global efforts together with regional partners such as the EU,” said the minister, whose country is Security Council president next month.

The Climate, peace and security event concluded a week of diplomacy by the EU on climate that included a ministerial meeting it chaired with Canada and China last week, and activities carried out by EU delegations worldwide.

Mogherini said there were now three priorities in addressing man-made climate change to which the solution was also man-made.

“First of all we must treat the symptoms of climate change,” she told the meeting, citing an electrification project in Niger and the Great Green Wall in the Sahel.

“We must also treat the causes,” and the 2015 Paris Agreement was the “first line of defence” there.

The EU, she noted, last week raised to 45 from 40 per cent the cuts in emissions it is seeking to achieve by 2030 “to lead by example”.

Thirdly, since “climate change has an impact on everyone’s security…international cooperation is the only way forward to address such common challenges.”

There was no explicitly humanitarian theme on Friday, said Climate Centre Director Maarten van Aalst, who was also at the session.

“But we’re very encouraged by the EEAS ‘points for further action’ the meeting generated, starting with the call to elevate the climate-security nexus to the ‘highest political level’ in all forums.

“Humanitarians everywhere will also welcome the aspirations to improve early warning systems, focusing on most exposed parts of the world, alongside building people’s resilience.

“It was good to hear many people in Brussels call for a focus on concrete actions, including short-term measures to address climate impacts in fragile areas facing droughts, coastal flooding and other natural disasters.”

Last Friday’s high-level event in Brussels wants to elevate the climate-security nexus to the “highest political level” in all forums worldwide. Late last year the ICRC said that poor security in the Sahel region was overshadowing a “massive humanitarian crisis affecting 12 million people in five countries”. Armed conflict, transnational crime and climate hazards were together causing immense suffering and an increase in displacement and migration toward Europe from Burkina Faso, Chad, Mali, Mauritania and Niger, according to the International Committee. (Photo: EEAS)