Cities face dramatic rise in risks from heat and flood by 2050, researchers say 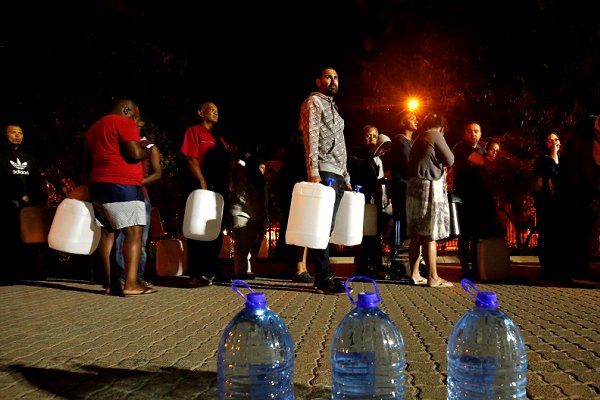 (This story appeared first yesterday on the Thomson Reuters Foundation website. It has been edited slightly here for length.)

In the next 30 years cities around the world will face dramatically higher risks from extreme heat, coastal flooding, power blackouts, and food and water shortages unless climate-changing emissions are curbed, urban researchers warned.

Currently more than 200 million people in 350 cities face average daily peak temperatures of at least 35 degrees Celsius for three months a year, according to a study by C40 Cities, a network of cities pushing climate action. But by 2050, more than 1.6 billion people in 970 cities will face those conditions, researchers predicted.

The number of people in poverty and battling brutal heat – usually without air conditioning – will rise tenfold, they said.

“This is a wake-up call,” said Kevin Austin, Deputy Executive Director of C40 Cities, at a meeting in Cape Town this week on adapting to climate change.

“The magnitude of people affected by heat will be much greater than today if we continue to increase greenhouse gases at this rate.”

‘In a crisis like this there is no time for trial and error.
You have to get it right the first time’

With experts at the meeting predicting extreme weather such as heavy rainfall and flooding could trigger everything from disease outbreaks to road failures, food shortages and closed schools, Austin said cities must take direct action to curb risks as well as cut emissions.

In Seoul, for example, an elevated thoroughfare through the centre of the city has been removed, opening up access to the river and lowering heat by at least half a degree, he said. South Korea’s capital also has planted more than 16 million trees and created shaded cooling centres.

“We want to encourage cities to adopt more of these solutions and implement them as quickly as possible,” Austin said.

The research, carried out by the New York-based Urban Climate Change Research Network, looked at data from more than 2,500 cities and predicted likely conditions if emissions continue to rise at their current rate.

It found that Cape Town’s ongoing battle with drought-driven water shortages could become far more common, with over 650 million people in 500 cities – among them Sao Paulo and Tehran – likely to see their access to water reduced by 2050.

Many cities are already aiming to cap water use per person, with Los Angeles pushing for 200 litres a day, Melbourne for 155 litres, and Cape Town a dramatically reduced 50, Austin said. The US Geological Survey estimates that an average American today uses at least 300 litres of water per day.

Austin said sharing advice on how to make cuts – including insights gained in Cape Town which has slashed its water use by half in the face of extreme drought – can save cities time.

“In a crisis like this there is no time to go by trial and error. You unfortunately have to get it right the first time,” she said at the Adaptation Futures conference in Cape Town.

The C40 Cities study also found that by mid-century over 800 million people will live in 570 coastal cities at risk of flooding from weather extremes and sea-level rise.

Flooding presents a particular risk to urban power supplies, with many power stations located in flood-prone areas, putting everything from transportation to heating and hospitals at risk.

Decentralising power systems – including by getting clean energy from a larger number of smaller power plants – could help cut the risks, researchers said.

But flooding risks may be coming faster than expected. Patrick Child, the European Commission’s deputy director-general for research and innovation, said a predicted one-metre rise in sea levels once anticipated by 2100 is now likely by 2070.

Flooding as well as water scarcity are two of the biggest challenges facing cities, said Jeff Hebert, Vice-President for Adaptation and Resilience at the US-based Water Institute of the Gulf and former chief resilience officer of New Orleans.

“Cities are constantly having to navigate between the extremes of too much water or not enough of it,” Hebert told the Thomson Reuters Foundation in an interview in London.

The Climate Centre has prioritized urban resilience as an emerging theme with a special focus on Asia and Africa, with the aim of promoting climate-sensitive urban planning, connecting cities to global processes and strengthening Red Cross Red Crescent National Societies’ urban portfolio, the Climate Centre adds.

Through the Future Resilience for African Cities and Lands programme it is facilitating dialogue between scientists and urban actors using learning labs in, last year for example, Lusaka and Windhoek.

A task force for forecast-based financing in urban settings was launched at the FbF dialogue platform in Berlin last year, and the Climate Centre is partnering with city officials, disaster managers, public-health experts and meteorologists on a guide to heatwaves in cities.

People line up in Cape Town to fill water containers amid the city’s ongoing battle with drought-driven water shortages that new research finds could become much more common. By 2050 some 650 million people in 500 cities face reduced access to water, it says. The South African city is hosting the 2018 Adaptation Futures conference – the first time the event has been held in Africa. (Library photo: Mike Hutchings/Reuters)