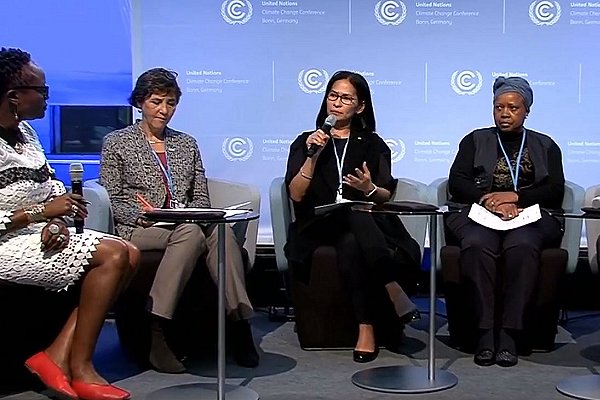 Governments last Thursday ended two weeks of talks in Bonn on operational guidelines for realizing the Paris Agreement to be presented at COP24 in Katowice, Poland in December.

UNFCCC Executive Secretary Patricia Espinosa told a closing press conference that some progress had been made in Bonn, but “many voices are underlining the urgency of advancing more rapidly on finalizing the operational guidelines.

“The package being negotiated is highly technical and complex. We need to put it in place so that the world can monitor progress on climate action.”

A further preparatory international meeting will now be held in Bangkok in September from which the draft guidelines will go to COP24 for adoption.

In parallel to the formal negotiations, the Bonn meeting saw the first airing of the long-awaited Talanoa Dialogue, named after the Pacific tradition of communal storytelling.

Her story, addressing the Talanoa question on how we get where we need to be on climate, featured three individuals calling for all hands on deck – states, communities, development and humanitarian workers.

The UN press release said: “The [Talanoa] dialogue wrote history when countries and non-Party stakeholders including cities, businesses, investors and regions engaged in interactive story telling for the first time.”

The Climate Commissioner of the Philippines, Rachel Herrera, told the Technical Expert Meeting on Adaptation (TEM-A) – an interface between formal negotiations and global climate action – that locally mandated planning in her country was diffuse but “it’s the same bottom line: food on the table, safe shelter, sustainable livelihoods”.

With support from the Red Cross Red Crescent and Partner for Resilience (PfR) to “join the dots” from community to national level, she said, “we are not only ensuring that the plans are holistic and address the needs of the most vulnerable communities, but also building the collective understanding of our local leaders, national government agencies and communities”.

The Bonn TEM-A was jointly convened for the UN by the IFRC and its Climate Centre, the Green Climate Fund, Business for Social Responsibility, and the Climate Technology Centre and Network.

Poland’s chief climate negotiator, Tomasz Chruszczow, said at the end that this was “where the opportunities are”.

Arguing for a focus on people who actually experience both extreme-weather and slow-onset events, he said: “They are not experts from outer space but from where the needs are.”

Calling for localized approaches, he said that whatever needed to be done for the benefit of a local community needed to be developed with that community, while also factoring in ecosystems.

Mr Chruszczow, who is also COP24 Polish Climate Champion, called for new approaches and “predictability…to drive the necessary finance that would support those that need [it] – the most vulnerable communities”.

Country delegates, experts and representatives from observer organizations such as the IFRC took part in a Suva expert dialogue session on loss and damage, where the International Federation also emphasized the centrality of integrated risk management that starts with and focuses on communities.

Forecast-based financing (FbF), outlined in Bonn by the German Red Cross and recently expanded by the inclusion of an FbF ‘window’ in the IFRC’s Disaster Relief Emergency Fund, emerged as one humanitarian solution in a Suva session on risk.

A Bonn expert session on boosting the climate resilience of the world’s most vulnerable people includes moderator Musonda Mumba (far left), Valerie Kapos of UNEP, the IFRC’s Donna Lagdameo, and (at right) Ndivile Mokoena of Gendercc Southern Africa – Women For Climate Justice Network; out of shot are Jaime Revenaz-Webbe of CTCN and Jason Spensley of the Green Climate Fund. (Photo: UNFCCC)