‘New humanitarian forecast-based fund could be a game changer’ 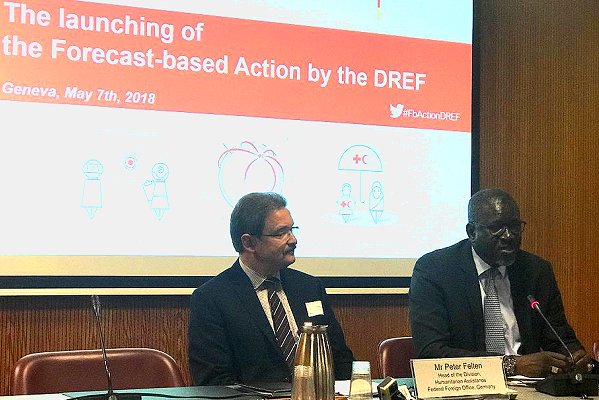 (This story is a press release issued yesterday by the IFRC in Geneva; a Thomson Reuters Foundation story on the new fund appeared earlier today.)

A ground-breaking new humanitarian fund designed to mitigate and even prevent the damage and trauma caused by natural disasters was launched yesterday by the IFRC in Geneva.

“We think this is a game-changer, not only for the Red Cross and Red Crescent, but for humanitarian action as a whole,” said Pascale Meige, IFRC Director of Disaster and Crisis Prevention, Response and Recovery.

“Our new forecast-based action fund means that guaranteed money will be available to help communities prepare for a disaster before it strikes.”

The IFRC’s forecast-based action fund uses a combination of weather predictions and historical data to fix triggers for the automatic release of money for pre-agreed early action plans. For example, a combination of forecast rainfall combined with the level of a river at a certain point can be used to activate funding for downstream evacuations and the distribution of shelter kits for the people who have been moved to safer ground.

“For decades, humanitarians have been calling for a shift to proactive and preventative humanitarian action, but such action has so far been sporadic,” Meige added.

“For the first time, this fund, and the work we are doing to build country-level plans and agreements, can consistently deliver on this promise, turning promises into action.

“It means that life-saving action can now take place before anyone is in immediate danger, which will save lives and reduce the need for more costly emergency response and recovery efforts.”

‘It’s time to change how we plan
and deliver humanitarian assistance.
Waiting for disasters to happen
should not be an option any more’

The fund is being supported by the German Federal Foreign Office, with technical guidance from the German Red Cross, the Red Cross and Red Crescent Climate Centre, and other partners.

Peter Felten, Head of the Humanitarian Assistance Division at the German Federal Foreign Office, said: “It’s time to change how we are planning and delivering humanitarian assistance. Waiting for disasters to happen should not be an option any more.

“Forecast-based financing can operationalize the important window of opportunity between early warnings and a potential disaster,” said Felten (full remarks).

“The integration of forecast-based action within the DREF is a major step to widen the focus from response to anticipatory humanitarian action.”

The forecast-based financing approach – now being rolled out by IFRC at national level – has been piloted at community level since 2014, including in Peru, Togo, Uganda, Bangladesh, Mozambique and Mongolia.

In Bangladesh, predicted flooding of the Bramaputra river in 2017 triggered cash grants for people who were able to use this money to support their families during the emergency.

Fifteen National Red Cross and Red Crescent Societies in Africa, Americas and Asia Pacific are currently developing early action protocols for foreseeable and preventable natural disasters and are expected to access the fund in its first two years. However, the facility can be available for all 190 National Societies.

The launch by the IFRC is a landmark event for managing rising climate risk, writes Climate Centre Director, Maarten van Aalst, who was at the Geneva event yesterday.

The DREF early-action fund really takes forecast-based action to scale and shows how far we have come in a decade. In 2008, an early-action emergency appeal in West Africa, the first of its kind, failed to attract significant donor support.

Reviewing the effectiveness of some of the early actions still taken by National Societies in the region, the 2009 World Disasters Report called for more systematic early action across timescales in the light of rising climate risks.

In 2011, the first concepts were developed for systematic financing based on pre-agreed forecast thresholds, and in 2013 the first pilots were initiated in Togo and Uganda, supported by German Red Cross, subsequently followed by the German Federal Foreign Office and several others in the donor community.

As an IFRC reference centre on climate risk management, it has been a privilege to support the Red Cross Red Crescent Movement on this journey.

It has also involved solid groundwork in science and novel partnerships with, for instance, meteorological offices, as well as new dialogues about risk management across humanitarian, development and climate spheres.