In just 2 months in even the ‘normal’ monsoon now forecast, Bangladesh could get rainfall close to UK 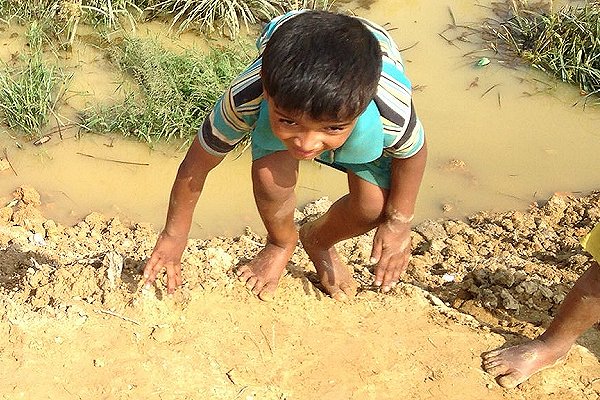 Pre-monsoon rains fell last week on what is now regarded as the most densely populated refugee settlement in the world – and certainly among the most acutely vulnerable – near Cox’s Bazar on Bangladesh’s southern coast.

On Wednesday, a “bout of rain lasted only an hour, but brought strong winds and left destruction in its wake,” the UK Guardian’s Kaamil Ahmed reported from the city.

“I thought my hut was going to be blown down by the wind,” he quoted Nur Jahan, 27, as saying. “I was trying to save my ration cards because I thought if I lost those, we won’t be able to get our rations.

“The water was gathering on my roof and it almost caved in, and at the same time I was worried about it blowing off.”

The IFRC’s Lynette Nyman, who visited the camps the morning after the downpours, tweeted that the rains had provided a glimpse of what was coming when the monsoon proper is unleashed.

Photos tweeted by the International Organization for Migration graphically highlighted the access problems that heavy rains will bring humanitarian agencies.

‘Around Cox’s Bazar we have triple jeopardy:
a routine weather-hazard possibly exacerbated
by climate change and certainly by
displacement on a massive scale’

The IFRC’s Head of Operations in Cox’s Bazar, Steve McAndrew, told Reuters conditions in the camps are getting worse, and “they are going to continue to get worse as the rainy season comes”.

The South Asian Climate Outlook Forum (SASCOF) Friday said “normal rainfall is most likely” during the monsoon season, with some local variations between above and below normal.

At the end of its meeting in Pune, India, however, the SASCOF statement, reported by the World Meteorological Organization, recalled that although last year overall monsoon rainfall was also statistically near average, many parts of South Asia were anyway affected by flooding – most seriously after extremely heavy rainfall centred on eastern Nepal, northern Bangladesh, and adjacent areas of India; more than 40 million people were affected and an estimated 1,200 people died.

The statement added that there’s now is “acute concern” about the impact of the monsoon and cyclone season.

Historically, the wettest month in Bangladesh is July, when it can rain almost every day, generating a total for an average month of up to around 600mm; by comparison, the UK – a country famous for its rainy weather – got 1,133mm in the whole of 2017, an average year, according to its Met Office.

Climate Centre Director Maarten van Aalst said the potential destructiveness of even a below-average monsoon has emphasized the centrality of the “maximum effort” for seasonal preparedness the Red Cross Red Crescent and other agencies have been engaged in for months now.

“This grievously hazardous situation in Cox’s Bazar is a clear example of how we need to advocate for what’s now called climate-risk management – even without a seasonal prediction or certainty about a strong trend,” he said Friday.

“The key issue with ‘risk’ is often not so much the hazard itself but exposure and vulnerability: in this case the huge number of people concentrated in dangerous places in very difficult conditions.

“I’d also emphasize the intense rain in the monsoon last year in Bangladesh, which fits a pattern of a rising uncertainties and rainfall extremes – in the case of Cox’s bazaar exacerbating one of the most unpredictable hazards of all: landslides.

Up to around a quarter of homes in the Cox’s Bazar camps are reported to have been destroyed by Cyclone Mora last year, with hundreds of thousands of people digging new ones into precarious hillsides and flood-prone land that local people have avoided settling on.

Van Aalst added: “In effect, around Cox’s Bazar, we have triple jeopardy: a routine seasonal risk very possibly exacerbated by climate change and certainly by displacement on a massive scale.

Short-term intensity of rainfall will also be a key risk-management issue over the next few months, Van Aalst warned, and disaster managers are strongly advised to monitor local five- or six-day forecasts and the IFRC map room for indications of this.

“With limited humanitarian resources, rarely will the Red Cross Red Crescent focus on the most vulnerable have seemed more essential,” he added, recalling the inter-agency assessment that used drone imagery, historic rainfall data, and local interviews to gauge the risk of floods and landslides throughout what it called “the complex warren of interconnected streams and sloping hills” in the camps.

That risk analysis, released in January, estimated that at least 86,000 people were living in areas at particularly high risk of floods while more than 23,000 were on steep, unstable hillsides that could crumble with continuous heavy rainfall; the camp population has risen by some 200,000 people since.

The most recent (12 April) sitrep from the Inter Sector Coordination Group puts emergency preparedness for the cyclone and monsoon season at the top of its list of operational highlights.

“Refugee sites remain dangerously congested and exposed to serious risk of floods and landslides,” the ISCG says. “At present refugees are limited to bamboo and tarpaulin shelters; they have nowhere to escape high-wind events like cyclones.”

For now, brief pre-monsoon downpours in the camps near Cox's Bazar have caused relatively minor disruption and provided children like these small boys, wading across the puddles that appeared outside their homes last week, with somewhere new to play. But they are also a warning shot on what is to come when the monsoon season proper begins shortly. (Photo: Lynette Nyman/IFRC Cox’s Bazar)