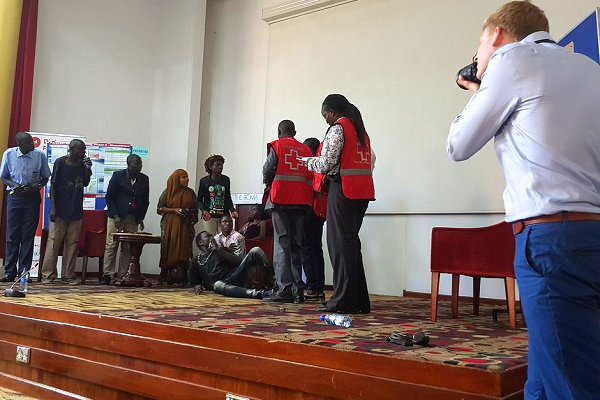 Ten national African meteorological services were last month represented at the first dialogue platform for forecast-based financing (FbF) to be held on the continent, hosted by the Kenya Red Cross Society (KRCS) in Nairobi.

Zambia, with Dutch government support, recently became the latest country to embrace FbF as a potential component in its strategy for disaster management, and Zambian meteorologists attended the Nairobi meeting with colleagues from Ethiopia, Kenya, Madagascar, Malawi, Mali, Mozambique, Niger, Togo and Uganda.

In total, the event drew at least 130 government, UN, NGO and academic specialists, members of the humanitarian and development communities, as well as at least 16 National Societies.

Discussions centred on the science behind forecasting, trigger methodologies, risk, financing, and prospects for scaling up FbF.

Stefanie Lux, FbF coordinator at the German Red Cross, described FbF methodology as developed over the past five years in pilots around the world, supported by the German government through the Red Cross.

Robert Kaufman, the IFRC’s Deputy Regional Director for Africa, paid tribute to the German Red Cross who had “been intellectually and operationally leading FbF and put major efforts into developing the concept”.

He added: “We can’t sit back when we know something bad is going to happen,” and “a good measure of success is when fewer people tomorrow need our help than those who needed it yesterday.”

The UK Met Office, also at the Nairobi meeting, tweeted on its session with the Climate Centre on “impact-based forecasting and how this can support FbF and other forms of early action”; the topic generated a lot of interest, with many participants calling for expertise to support forecasting agencies in making the transition to FbF-type work.

The UK-funded Weather and Climate Information Services for Africa and Science for Humanitarian Emergencies and Resilience programmes helped harmonize messages about the need to move faster toward more impact-based forecasting models.

“FbF is a relevant topic for the Mali meteorological service, and I look forward to learning more about the transition towards impact-based forecasting,” said the service’s Diabate Fatoumata Sangho.

More than 60 Red Cross Red Crescent specialists gathered a day before the main event, at the Boma conference centre, to introduce new Movement partners to the FbF concept.

“The dialogue platform was an opportunity to explore how we as National Societies can anticipate disaster better and support the most vulnerable with effective early action,” said Renatus Mkaruka, Director of Disaster Management at the Tanzania Red Cross Society.

The meeting heard calls for the engagement of existing government structures in the implementation of FbF – a theme covered in a recent study from the UK-based Overseas Development Institute (ODI).

In his closing remarks, Youcef Ait Chellouche, IFRC representative at the African Union, invited participants to continue dialogue at the national level on a more efficient financial system to address risk in vulnerable places in the window of opportunity between a forecast and a disaster.

The Nairobi dialogue platform was supported by the German and Netherlands Red Cross, the UK Met Office and ODI, with technical support from the Climate Centre.

Kenya Red Cross volunteers at the Nairobi dialogue platform enact an FbF-related intervention in a village. The FbF conference was the first to be held in Africa, and took place shortly after Zambia became the most recent nation to embrace FbF as a potential component of its national strategy for managing disaster risk. (Photo: Becky Hemingway via Twitter)