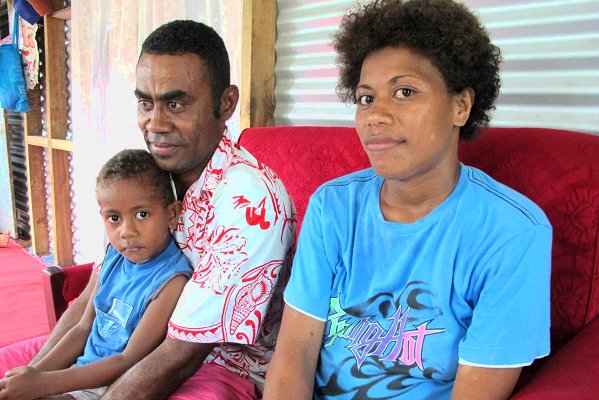 The first wave that slammed into the beach-front community of Nasau, on Fiji’s Koro island, swept away every home in view.

The second tore away most of the concrete house where Rupeni Koto’s family and eight others were crammed together to ride out Cyclone Winston, the southern hemisphere’s first Category 5 storm.

“The kids were terrified,” he remembered. “I told them to hold onto whatever you can.”

The third wave, the biggest yet, ripped his five-year-old daughter from his arms, sending her floating away, clinging to a door. Around her, the sea churned with trees and debris, and injured people swam desperately toward a steep, brush-covered slope at the back of the beach.

Koto, 53, was one of the lucky ones. He, his wife and all four of their children were washed toward the hillside, where they caught hold of a collapsed tree.

For six hours they clung there, the storm screaming around them, unsure if they were the only people still alive in the village of about 350.

“We reached a stage where we were no longer afraid of death,” Koto remembered. “We had gone through so much.”

Finally, when the storm died down, they crawled up the hill and found other survivors at the top. Two days later, with no place to live, they got on a boat to Suva, Fiji’s capital, and moved in with Koto’s 23-year-old son and his girlfriend, who had a rental home there.

‘Fijians are happy people. They brush things away.
But with this one, it was very hard to pick up’

Worsening extreme weather linked to climate change is uprooting more people from their homes around the world, creating hardship for many. But the psychological trauma that often accompanies displacement and loss is as much a worry as the economic costs, experts say.

With millions more expected to be forced from their homes as a result of extreme weather and other pressures in coming years, finding ways to deal with the emotional burdens – not just the physical ones – will be crucial, they say.

“We know migration is associated with higher risk of mental health problems like depression and post-traumatic stress disorder,” said Susan Clayton, a psychologist interested in displacement at the College of Wooster in Ohio, in the US.

“It’s not just the process of migrating that is stressful, but being in a new place where you may be unwanted or you’re less familiar.”

When Cyclone Winston hit Fiji in 2016 – the strongest storm ever recorded in the region – “the shock to the community was beyond our capacity”, said Nete Logavatu, a Fiji Red Cross disaster responder. “Months later, when they told the story, people were still crying.”

“Fijians are very happy people. They brush things away. But with this one, it was very hard to pick up again,” he told the Thomson Reuters Foundation.

Winston left no shortage of trauma in the South Pacific nation. Forty-four people died, nine of them in Nasau. Hundreds were injured. Damage across Fiji was estimated at US$ 1.4 billion.

On once-prosperous Koro island, families lost everything – homes, clothes, photos, taro crops and long-established plantations of kava, a shrub that takes years to re-establish and whose roots are used to make a traditional drink.

Until the cyclone, Koro, with its rich soils and excellent transport links to the rest of Fiji, had been one of the country’s biggest producers of kava.

Laisiasa Caukiuai, the headman of Tutua, another storm-ravaged village on Koro island, turned stone-faced when asked about his community’s struggle after the disaster.

“We lost the crops, everything. After the cyclone, we had nothing,” he said. “It’s a hard thing to grasp that you’re the main earner of the family and overnight you’re a beggar.”

Two years on, “I’m still feeling poor compared to before,” he added.

‘I think half the island came into Suva’

But for many affected families, financial losses were only the start of their stress.

In the days and weeks after the cyclone, many Koro refugees moved in with extended family, particularly in the capital, on Fiji’s biggest island.

“I think half the island came into Suva,” recalled Jekope Rabaleinatosia, a Red Cross responder who worked in Koro after Cyclone Winston. “It’s normal for Fijian families to have a house with two bedrooms and 20 people in it.”

But the disaster shifted family dynamics. Prosperous Koro farmers, used to paying rent for college-age children and other relatives in Suva from their harvest earnings, suddenly found themselves the dependents.

Koto’s older son Soane, now 25, insists that hosting his family for eight months did not put a strain on his relationship with his girlfriend – even though she was paying the rent.

“When somebody needs help, we are happy all the time [to give it], no matter,” he said.

But for Koto, a quiet man, the situation was disconcerting. He picked up odd jobs doing carpentry – a skill he had learned back on Koro – but he earned far less than from his crops.

His children started at new schools in Suva, but – like many Cyclone Winston survivors – were terrified when they heard heavy rain or wind.

“They go in their room and cover themselves up. Even in me, the fear is still there,” Koto said.

Living in his son’s crowded home worked because “we all pitched in. But I wanted to be independent,” he said.

‘I told people in Suva, “If we don’t address this now,
it’s going to be bigger than Winston”’

For some of those uprooted by Cyclone Winston, moving in with family meant violating social taboos.

Filipe Nainoca, Director-General of the Fiji Red Cross, said that in his home village, as in others across the island nation, a brother-in-law and sister-in-law are not allowed to stay alone together in a house, for instance.

In the aftermath of the cyclone, however, there was little choice. “When you live together, you break all these taboos. But you had to,” said Nainoca.

Even where the rules were not being broken, the strain that can accompany long-staying guests often set in, he said.

“You stay for one month, it’s okay. Two months is difficult. Three months becomes a burden,” he said. “Who feeds who? Who pays the electricity?”

Marica Kepa, who manages counselling for the Fiji Red Cross, said the storm forced her agency to rework its approach to disaster assistance, as it quickly became evident that psychological stress was as big a problem as the physical losses.

“With other storms, people were up and moving within two or three weeks. But this time I felt hopelessness,” she said.

“I told people in Suva, ‘If we don’t address this now, it’s going to be bigger than Winston’.”

Since the cyclone, the agency has made psychological help part of its disaster aid package, training volunteers to explain to parents why their children may climb into bed with them more often or run away from school when the wind picks up.

“You can have all the food and water in the world, but if nobody relieves you of your stress and helps you talk about your problems, it won’t work,” Kepa said.

Efforts have been largely focused on storm-hit parts of the country, which means people who fled elsewhere have not had the same help, she said, nor the chance to work alongside their neighbours to rebuild, another way to work through stress.

“People in the villages were lucky – we were there,” said Kepa, who is based in Suva. “But the ones who came here, none of us talked to them. It’s a big thing to move from your island, your comfort zone. And they didn't get help.”

For Koto, in Suva, the long stay at his son’s home came to an end when his eldest child, working in Australia, got together enough money for his father to buy a plot of land in Suva and build a modest house. The family moved in last year.

“For now this is home,” Koto said.

Tutua headman Laisiasa Caukiuai, his wife Vuladromu Turiagaigusuna and his three-year-old son, Rusiate, at a family member’s house in Suva last month. “We lost the crops, everything. After the cyclone, we had nothing,” he says. “It’s a hard thing to grasp that you’re the main earner of the family and overnight you’re a beggar.” (Photo: Laurie Goering/Thomson Reuters Foundation)