‘Now more than ever, we need to be weather-ready, climate-smart and water-wise’ 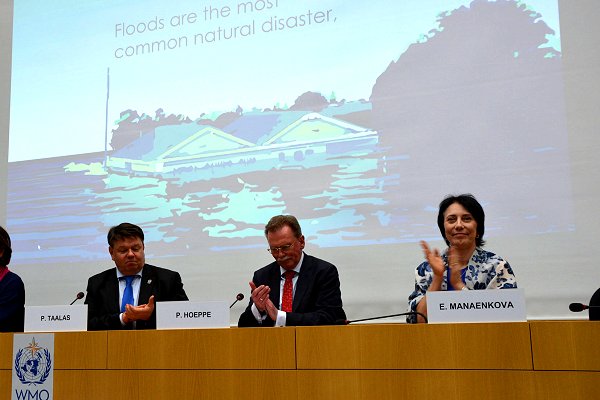 The theme of this year’s World Meteorological Day – Weather-ready, climate-smart – “highlights the need for informed planning for day-to-day weather and hazards like floods as well as for naturally occurring climate variability and long-term climate change,” the WMO said today.

World Meteorological Day takes place every 23 March to commemorate the entry into force in 1950 of the convention creating the WMO.

A WMO press release said the theme was chosen to underline “the central role of national meteorological services in decisions as diverse as when to carry an umbrella, whether to…evacuate from a major storm, when to plant and harvest crops, and how to plan urban infrastructure and water management decades ahead.”

WMO Secretary-General Petteri Taalas said: “Now more than ever, we need to be weather-ready, climate-smart and water-wise.

“This is because the ever-growing global population faces a wide range of hazards such as tropical cyclone storm-surges, heavy rains, heatwaves, droughts and many more.

“Long-term climate change is increasing the intensity and frequency of extreme weather and climate events and causing sea-level rise and ocean acidification.

“Urbanization and the spread of megacities means that more of us are exposed and vulnerable.”

This year had started where 2017 left off, Mr Taalas added, with extreme weather claiming lives and livelihoods.

Floods uprooted millions of people on the Asian subcontinent, according to the WMO’s Annual Statement on the State of the Global Climate in 2017 yesterday, whilst drought exacerbated poverty and increased migration pressures in the Horn of Africa.

“The dramatic reduction in the lives lost due to severe weather events in the last thirty years,” the WMO press release adds, however, “has been largely attributed to the significant increase in accuracy of weather forecasting and warnings and improved coordination with disaster management authorities.

The WMO was now working to establish a global multi-hazard alert system in collaboration with national meteorological and hydrological services.

Zambia recently became the latest country to embrace FbF as a potential component in its national disaster-management strategy.

The UK Met Office, also at the Nairobi meeting, yesterday tweeted that it was running a session with the Climate Centre on “impact-based forecasting and how this can support FbF and other forms of early action”.

The Red Cross Red Crescent including the Climate Centre and other partners have been working with national met services to pilot FbF operationally worldwide for several years now, from Peru to Uganda to Bangladesh, with support from the German government and Red Cross, and most recently – with British Red Cross support – in Mongolia.

On World Meteorological Day 2018, the WMO warned of the growing need to be “weather ready and climate smart”, while a presentation reminded delegates tmeeting for the occasion that floods are the most common natural disaster. (Photo: WMO via Flickr)