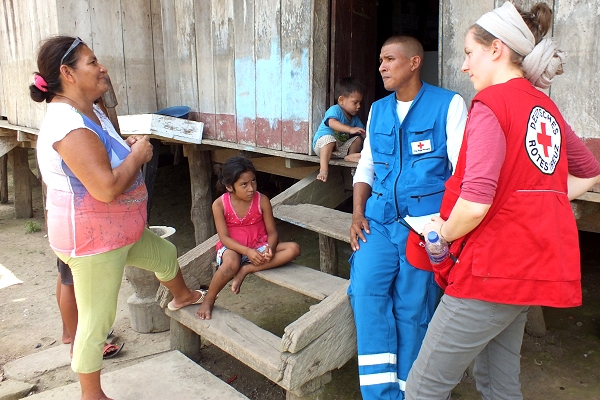 March sees the start of the peak flood-season in the Peruvian rain forest, and it can leave remote Amazon communities cut off for many weeks on end.

A three-day inter-agency assessment mission that ended last weekend led by the Red Cross took in isolated communites dotted along the Ucayali and Marañon rivers that merge to form the Amazon, as well as the River Napo, an Amazon tributary.

The PRC volunteers, from the Nauta and Maynas branches, interviewed villagers on their experience of past floods and how they saw their general level of readiness for this season.

The team were especially interested in getting an idea of specific river levels people considered a danger to them, and hear accounts of the damaging floods in 2012 and 2015.

The Peruvian Red Cross believes it will now be better placed to determine concrete humanitarian FbF interventions this season; cash transfers are considered one likely option.

“With extremely high river-levels, not only does the price of food and transport rise,” one resident said, “but we are often forced to leave our houses and live for months in the forest or on the streets of Iquitos [the Loreto capital].

“We get diarrhoea and the health post is packed. We don’t have drinking water – there are no toilets. And when we go home we will often have lost our seeds for planting.”

The assessment team were told that people’s food reserves run out in severe floods that can last as long as four months; livestock is also lost.

The sparsely populated Loreto region is by far Peru’s largest and covers about a third of its territory; mainly jungle, it includes large flood plains that are usually underwater in summer.

The numerous rivers that criss-cross the province are all part of Amazonian system.

With Mongolia, Togo and Uganda, Peru is one of several countries where FbF has now been deployed operationally by the Red Cross Red Crescent, supported by the German or British Red Cross.

Jorge Morao, a volunteer at the Peruvian Red Cross Nauta branch, interviews Rosa, a mother of four, who said the 2012 experience inspired them to adapt their house on stilts so the living area was above the new danger level. On the right is Charlotte von Lenthe, Latin America Desk Officer with the German Red Cross. (Photo: Climate Centre)