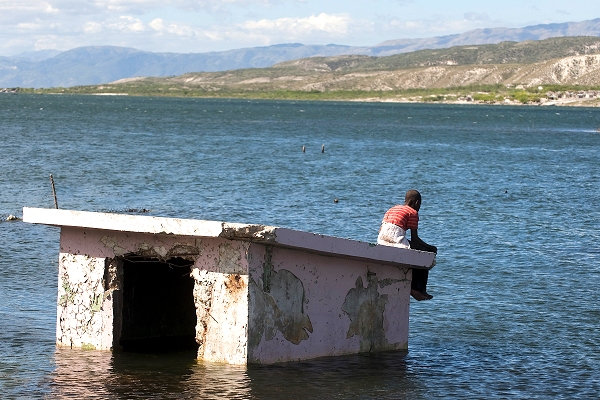 (A version of this story appeared first in French last month on the website of the Haitian Red Cross.)

The President of the Haitian Red Cross (HRC), Jean-Pierre Guiteau, has expressed the hope that a Partners for Resilience (PfR) workshop in Port-au-Prince last month heralds the “harmonizing of a joint vision for an early-warning system for the Artibonite river basin involving the National Societies of Haiti and the Dominican Republic”.

The HRC had also begun discussions with the operators of the Péligre dam on the Artibonite in Centre department about possible collaboration between the hydropower and humanitarian sectors to improve flood-risk management and the use of natural resources in communities downstream.

The Artibonite river is Haiti’s most important, and the longest on the island of Hispaniola; it forms a short part of the international border with the Dominican Republic, where its source lies.

The Artibonite basin contains the largest single tract of arable land in Haiti and is also the region most vulnerable to floods – some of which are managed by the dam.

An outline of the Red Cross plan for early warning was shared with dam officials during a recent visit there that included senior HRC branch personnel from Plateau Central province and Appolon Leandre – head of the HRC training centre and a civil engineer who handles knowledge management for PfR in Haiti; trainers from the PfR-supported J’Adapte programme were also there.

It’s hoped early warning early action in the Artibonite basin will be discussed at a Climate Centre side event exploring “ways to turn risk information into improved decision-making and development outcomes” to be held with the International Hydropower Association at the Understanding Risk 2018 conference in Mexico City in May.

The vision for the Artibonite includes the sharing of information on releases with the Péligre dam, and on river and rainfall observations upstream from the dam on both sides of the border.

A young Haitian sits on the roof of a flooded building on one the lakes on the border with the Dominican Republic in 2010. (Library photo: Olav Saltbones/Norwegian Red Cross via IFRC)