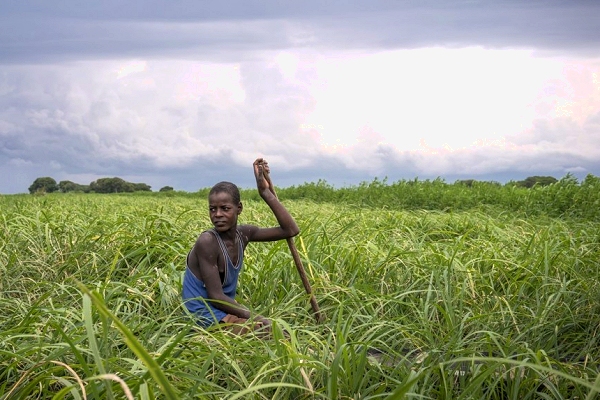 (This story appeared first on Monday on the Thomson Reuters Foundation and BRACED project websites. The ICRC said last month 2017 saw a “severe deterioration of humanitarian conditions” across South Sudan, with a record 6 million people without sufficient food. It was continuing to provide food aid, seeds, tools, fishing nets, and water and sanitation facilities, and had begun supporting more health structures.)

The world’s youngest nation, South Sudan, has been embroiled in war and conflict for years.

The oil-rich nation – which won independence from Sudan in 2011 – descended into civil war in 2013, with tens of thousands of people killed and a third of the population forced to flee their homes.

Recent research found that extreme weather, such as prolonged drought, has increased competition between communities over dwindling resources like water and pastures.

Although data is hard to come by, historically conflicts frequently occur soon after a flood or drought, said a report by a group of NGOs and UN agencies.

For example, tensions between nomadic herders and settled farmers over wells or poor harvests can lead to unoccupied and frustrated men being lured into militias.

So could building resilience against climate shocks help bring peace to South Sudan?

“There is a growing momentum on investing in resilience in South Sudan,” said Nellie Kingston of Concern Worldwide, a charity that works on the UK-funded Building Resilience and Adaptation to Climate Extremes and Disasters programme.

The project in the East African country set up early-warning systems, weather-monitoring tools, field schools to teach farmers best practices, and stores to preserve and exchange seeds in the event of climate shocks.

It also established 17 environment clubs in schools for students to discuss climate issues and plant trees, for example, with the education minister who is keen to roll out such initiatives into the national curriculum, said Kingston.

An assessment of the project found that people felt more resilient to climate shocks after joining farmer groups, better managing their land and making savings, said Suzanne Philips of the UN Food and Agriculture Organization.

As well as equipping communities with better tools and responses to climate threats, the project sought to bring together tribes traditionally divided by conflict.

“It’s one of those things we can’t measure, but there are groups [taking part in the projects] that are made up of three ethnicities…so just the fact that they’re meeting on a weekly basis prevents more ethnic tension,” said Mangano.

Other outcomes of the project include communities becoming more self-sufficient and relying less on international aid, said Kingston, with other villages replicating some of the successful activities.

Although fragile states face huge social and economic problems, protecting people from natural disasters is possible and should be attempted despite the practical difficulties, UN officials recently said.

Conflict-torn countries may lack functioning governments, but pockets can be identified where it is possible to work with communities to reduce the risks of floods, earthquakes and other hazards, according to Robert Glasser, head of the UN Office for Disaster Risk Reduction.

Despite these successes and improved resilience in South Sudan the country is still highly vulnerable to climate shocks, said Kingston.

“Resilience interventions are feasible in South Sudan,” she said. “But flexibility is needed to tailor them to the local context and adjust to changing circumstances.”

A young boy last August rests in his canoe on the Nile near Detwok, South Sudan. In 2017, the number of wounded people the ICRC evacuated by air for surgery almost doubled compared with the year before, amid deteriorating humanitarian conditions. But some observers believe there is growing momentum for investing in resilience there nevertheless. (Photo: Mackenzie Knowles-Coursin/ICRC)