Rakhine refugees: ‘No child should bear the brunt of such a crisis created by adults’ 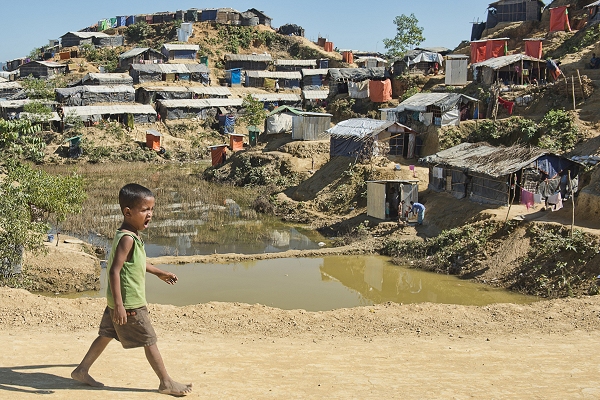 “With an uncertain future and no solutions in sight, the world must not let these children lose their own future,” an IFRC press release quoted him saying.

The BDRCS and the IFRC have now together reached nearly a quarter of a million people with life-saving emergency assistance including shelter materials, food, water and health care that also includes psychosocial support.

“Life is incredibly tough for everyone, but children and adolescents are especially vulnerable,” said IFRC Secretary General Elhadj As Sy, who also tweeted that 380,000 children in camps now risked losing their childhood altogether if the crisis persists.

They faced malnutrition and disease, he added, a lack education, trafficking and exploitation, and a looming monsoon and cyclone season that could trigger “a disaster within a disaster”.

At least 100,000 people could be in grave danger
from monsoon landslides and floods

Mr Sy continued: “UNHCR estimates that 7,600 children are trying to cope on their own, separated from their families. No child should bear the brunt of such a crisis created by adults.”

Earlier this month UNHCR warned that an inter-agency analysis of the geography of the Kutapalong and Balukhali settlement areas together housing nearly 600,000 people showed that at least 100,000 could be in grave danger from landslides and floods in the coming monsoon.

Up to a third of the settlement area could be flooded, it said, and more than 85,000 refugees could lose their shelters; another 23,000 living on steep slopes are at risk of landslides.

(That study said its assumption of the possible levels of major rivers – “with an enormous and complicated catchment area” – was based on observations of the monsoon from people resident locally for at least 20 years.)

The IFRC says the Red Cross Red Crescent is now prioritizing preparedness for new threats such as disease, cyclones and the monsoon, along with continued humanitarian assistance.

“The scale and speed of the displacement and the severe vulnerability of many of those displaced has created one of the most critical and complex humanitarian crises in the Asia-Pacific region in decades,” the Tuesday IFRC release adds.

Scientists say it will be mid-April before a reliable forecast of the possible intensity of the South Asian monsoon is available, although the level of people’s vulnerability – because of the steepness of the slopes and overcrowding in the temporary settlements – remains acute regardless of rainfall levels.

The main regional outlook for the summer monsoon season is expected from the SASCOF-12 meeting in Pune, India on or around 19 April, as is the relevant IRI three-month forecast that will be available via the IFRC map room.

The Bangladesh Meteorological Department says it expects to provide an outlook for the monsoon season next month.

Disaster managers are also urged to keep a close eye on their own local weather forecasts for more short-term forecasts and signs of the onset of monsoon rain as early as the middle of May.

A refugee boy walks past temporary shelters in Balukhali camp, where many people could now be in grave danger from landslides and floods in the coming monsoon. (Photo: Victor Lacken/IFRC)