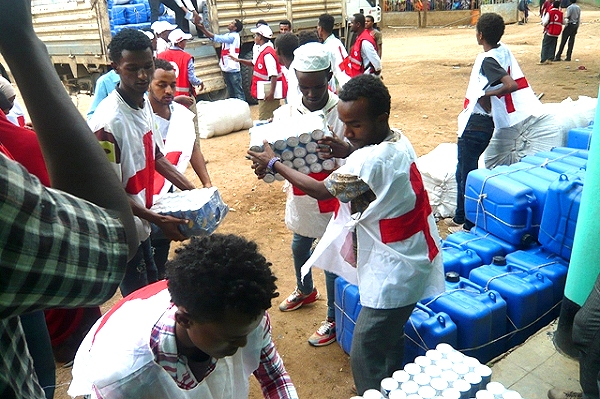 (This report is now being published on partner websites; it was posted on the Climate Centre site today, along with links to an animation illustrating how seasonal conferences on weather and climate help a range of professionals like farmers, doctors and humanitarian responders make better decisions.)

The report – A step toward resilience: addressing long-running crisis in Ethiopia’s Somali Region – adds that 33,150 other people, 42 per cent of them women, benefited from its work on water security.

When activities such as livelihoods for young people, natural resources, other water-related projects, and disaster risk reduction (DRR) measures are fully implemented, the number of beneficiaries will exceed the target of 50,000 people in the woredas of Gursum, Jigjiga and Tuli-Guleid, a foreword to the report says.

The Protracted Crisis Programme was a DRR-centred partnership between the Ethiopian Red Cross Society (ERCS), the NLRC, the Climate Centre and Wetlands International, supported by the Netherlands Ministry of Foreign Affairs.

Taking some of its inspiration from the integrated approach behind Partners for Resilience (PfR), also active in Ethiopia, its overall objective was to “improve [the] food security, livelihoods, water security and adaptive capacity” of communities that were themselves the “drivers of the entire planning and implementation process,” according to A step toward resilience.

The report itemizes the project’s achievements in its three main areas.

Water-security goals, secondly, were “largely met through the development of water facilities and establishing and enhancing the capacity of water management committees…a key element of sustainable use of water structures,” the new report says.

Climate Centre involvement in the programme, thirdly, centred on risk reduction for the most common climate-related hazards in the region: drought and (see below) flood.

“The main outputs contributing to this outcome included…strengthening contingency planning and early warning systems,” A step toward resilience adds.

Lessons learned from the lethal flash floods in the Somali Region capital Jijiga in April 2016 form an important element of the DRR section in the new report, writes the Climate Centre’s Fleur Monasso, who was in Ethiopia that year.

The heavy rain in the highlands upstream had been forecast but the danger implied was not immediately obvious. Within days of the Jijiga disaster, however, and with the flash flood in mind, the ERCS convened a workshop in Addis Ababa for regional- and woreda-level personnel from the Disaster Prevention and Preparedness Office (DPPO), meteorologists and Red Cross disaster managers. On the agenda were internal communications, annual seasonal conferences, the presentation of warnings and alerts, and inter-agency coordination.

That meeting bore fruit just a day later when a highland village in the River Shebelle area of Somali Region was successfully evacuated by the DPPO with no casualties after the National Meteorology Agency (NMA) issued a flood warning.

All agreed that the whole episode underscored to the need to ensure effective, proactive mechanisms exist for warnings to trigger action.

Collaboration in Ethiopia’s national- and regional-level seasonal conferences remains an important area of work after the programme. PfR will continue to engage with the government and the NMA to connect climate information and early action.

Up to three times a year the conferences bring together experts from the NMA as well as health, education, water, livestock and agriculture officials, and others from the Productive Safety Net Programme and the National Disaster Management Commission.

Through advisories via government channels they connect climate information to those whose livelihoods are at least in part shaped by changes in rainfall or temperature.

Through the Protracted Crisis Programme, the partners developed an animation to explain the value of seasonal conferences like the belg (rains) conference hosted by the Amhara regional government last week.

Information disseminated at seasonal conferences, for example, “is used as early warning but can also be used at community level for the cropping season,” he added.

A step toward resilience says the programme “created linkages between businesses, farmers, herders, town-dwellers, and the local government to identify what early action is to be taken and when.”