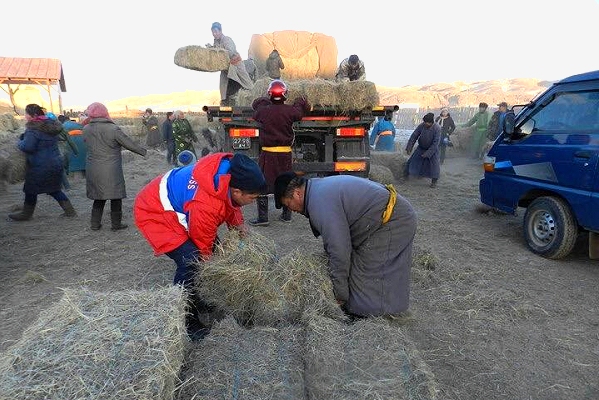 “The emergency help we’re announcing will target the hardest-hit households, those with young children, or five or more children, an older person, or someone with a disability,” said Gwendolyn Pang, Beijing-based head of the IFRC’s East Asia region.

“It will be enough to cover their essential needs for at least one month.”

The IFRC emergency plan for the Red Cross response in Mongolia says the current severe winter followed another summer drought – the conditions for what could be the country’s third consecutive dzud disaster – and have left millions of animals at risk of starvation.

Pang added: “In Mongolia, I’ve met herders fighting to keep their animals alive in an extremely harsh winter that magnifies the struggles of an already-vulnerable population.”

Earlier this year the Red Cross distributed 20 bundles of hay to more than 600 vulnerable households in Tuv and Uvurkhangai provinces, assessed from government mapping to be at extreme risk – part of ongoing work under the expanded IFRC emergency appeal for the 2016–17 winter.

Complementing this effort, with support from the UK government through the British Red Cross, the MRCS launched a bilateral forecast-based financing (FbF) operation developed by the Climate Centre to reduce dzud impacts – the first in Mongolia.

Two-thousand households in 40 soums (townships) got unconditional cash grants (video) under FbF, and some may now also get animal-care kits to help them through the rest of the winter.

Last week an MRCS-IFRC assessment of sample households in a soum in Tuv province revealed that herders had lost 10 per cent of their total livestock in recent weeks and surviving animals were weak or sick.

The Red Cross team were told that temperatures over the past few weeks had fallen almost to minus 50 degrees Celsius, which only around half the soum’s remaining 41,000 livestock could probably endure.

Out of 20 provinces and one city facing extreme winter conditions, the DREF operation will target seven of the most seriously affected, in areas not reached by the FbF work.

DREF assistance to 1,500 herder families in Arkhangai, Tuv and Uvs provinces will be cash grants of 240,000 Mongolian tugriks (US$ 100) – the official minimum wage; the money is unconditional and families can use it as they see fit.

A further 1,000 herder families in Bayankhongor, Darkhan-Uul, Dornogobi and Umnugobi provinces will each get a food parcel of flour, rice, cooking oil, sugar, tea and salt, and an animal-care kit of a mineral block and vitamins sufficient for 100 livestock for one month.

About 70 per cent of Mongolia is now covered in snow up to 45cm deep, according to Brigadier General Ariunbuyan of the National Emergency Management Agency, speaking at the end of January.

A national total of 141 out of 330 soums and a city are in “dzud condition”; temperatures approaching minus 50 Celsius were expected to continue through February, and it does not start to get properly warm in Mongolia until June.

Herding supports at least 160,000 families in the country of roughly 3 million people.

The Mongolian Red Cross distributed 20 bundles of hay to more than 600 vulnerable households in Tuv and Uvurkhangai provinces, assessed from government mapping to be at extreme risk of a new dzud disaster. More families will now be helped through a new humanitarian cash grant from the IFRC and forecast-based financing interventions supported by the British Red Cross. (Photo: MRCS via Facebook)