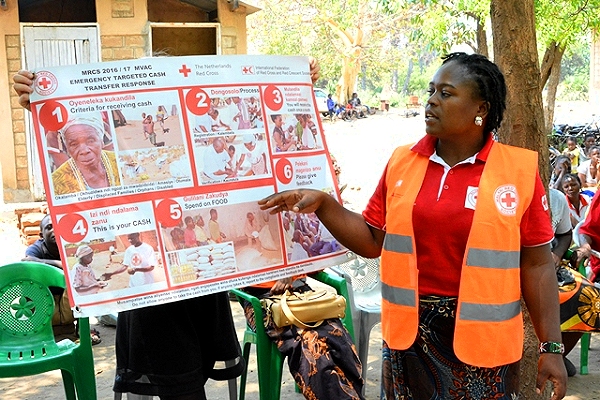 “This thinking allows social protection and humanitarian sectors to work together along the resilience spectrum – from prevention to preparedness, response, recovery and long-term development,” say Harry Mwamlima and James Chiusiwa, respectively directors of the country’s Poverty Reduction and Social Protection Division and of Disaster Risk Reduction at the Department of Disaster Management Affairs.

Writing in a foreword to a report released at the end of last week, the officials say “shock-sensitive social protection* has become a national priority in Malawi,” and is now reflected in strategies covering development, resilience and emergencies.

In the last two years, Malawi – whose people are heavily dependent on rain-fed agriculture – recently faced historic flooding followed, amid the strongest El Niño in a quarter of a century, by a catastrophic drought; all this on top of vulnerability to economic instability, price shocks and inflation.

The country went from 8 per cent of its people needing humanitarian food or cash in the 2014–15 lean season to 40 per cent, or nearly 7 million people, during 2016–17, the highest proportion in Southern Africa and in Malawi’s history, the officials write.

“To address these issues,” they add, the government is “driving a strategic discussion with key stakeholders on how to learn from these experiences,” and the new report is a product.

Towards A Shock Sensitive Social Protection System for Malawi includes contributions from the UK Overseas Development Institute and the Climate Centre; it was commissioned by the Government of Malawi with financial support from the Deutsche Gesellschaft für Internationale Zusammenarbeit and through the German contribution to the European Union Social Protection System Initiative, in cooperation with the World Food Programme and the World Bank.

The report argues that although investment in social protection, largely from expatriate donors, has increased significantly over the last decade, the current approach “does not adequately address the predictable seasonal nature of needs and food insecurity, which can be exacerbated by climate stressors.”

The launch of the country’s current social support programme, its second, opens up the opportunity to address both seasonal and acute variations in people’s well-being, reduce poverty and food insecurity, build resilience to shocks, and support early and effective emergency response.

Even normal seasonality “causes predictable, regular food gaps during the lean season [October to March], which in most cases require an emergency response,” the report says, while climate shocks like El Niño “cause exceptional periods of acute need”.

But forecasting, preparedness and risk reduction can mitigate impacts by enabling early response, and programmes have been trying out new ways to support households through social protection.

It’s hoped this will inform the design of systems that address both seasonal climate variations and extremes.

These efforts could be strengthened further, the authors argue, by developing multi-year, dependable programming, scaling up to deal with exceptional periods of acute need that result from unanticipated weather events, and closer coordination with humanitarian response.

In the financial arena, the recommendations imply greater investment in core social protection, multi-year commitments, and pooling of funds to enable more efficient coordination between government and donors.

*Policies and programmes to reduce poverty and vulnerability by helping people manage risks through cash or in-kind transfers, as well as social insurance and labour regulation and other schemes.

At the height of El Niño-related drought impacts in September 2016, Malawi Red Cross personnel launched a cash transfer programme in Chikwawa district, supported by the Netherlands Red Cross and the IFRC. Nearly 12,500 people got cash to help them through the drought for seven months as part of the government’s Malawi Vulnerability Assessment Committee work. (Library photo: Felix Washon/IFRC)