You’re invited to ‘Taste the Change’ 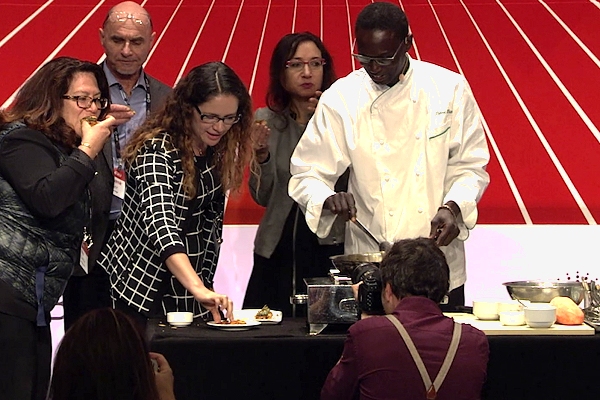 On stage, the alluringly fragrant crostinis were sizzling away. Chef Pierre Thiam, in tall chef hat and white jacket, was adding the finishing touches as the session got underway (video). The audience looked a little confused and highly intrigued.

The venue was the 2016 Business for Social Responsibility conference in New York, themed ‘Be Bold’.

Unbeknown to them, the participants were about to be invited to ‘Taste the Change’.

The audience of a couple hundred business professionals came expecting to hear the Climate Centre’s perspective on resilience. They wanted to learn about trends in the development and climate world and how they could apply to their own work.

They did not anticipate they would also get an unforgettable experience.

What was a world-class chef making up there on the stage? As they wondered, the Climate Centre’s Associate Director for Research and Innovation, Pablo Suarez, began to show the ways in which protein from insects is radically more beneficial for the environment – and ethical – than all forms of animal protein.

Suarez used an interactive game to reveal that much of the audience didn’t realize a staggering 22,000 litres of water is required to produce a single pound of beef.

They were equally shocked when they found out that one pound of edible insects requires only one litre of water.

And the audience began to put two and two together: the cooking on stage definitely involved insects.

The looks of delight as they bit into their first insect crostini quickly had a fear of missing out spreading through the audience.

Soon the stage was packed; in no time, the insect cuisine was gone.

In that short session, hearts and minds of the audience were shifted. They had – many for the first time – stepped away from their socially taught aversion to eating insects and towards a world of sustainable protein.

The first Taste the Change actually happened in Paris at 2015 Development and Climate Days – the first collaboration between the Climate Centre and Chef Pierre Thiam.

Since those first sessions, Climate Centre has continued to develop Taste the Change. At the 2016 D&C Days in Marrakech we partnered with junior chefs at the Café Clock culinary school and restaurant to challenge COP 22 policy-makers and practitioners.

In its work the Climate Centre strives to use creative and unusual educational tools for impact. So far, we’ve found that the invitation to Taste the Change entices and delights audiences.

What happens from here? Are past participants more likely to try insect protein on their own, as it starts to show up in their daily lives in the form of, for example, chocolates and protein bars?

Will they help start conversations in other parts of the world where insects are not eaten, and where insect production and consumption could contribute to addressing food security and weather- and climate-related food production challenges?

Are policy-makers more likely to push for support for small-scale insect farming?

We’re excited to further analyse Taste the Change experiences to see how they can contribute to a sea change in how we think and feel about the possibilities of sustainable protein available to us.