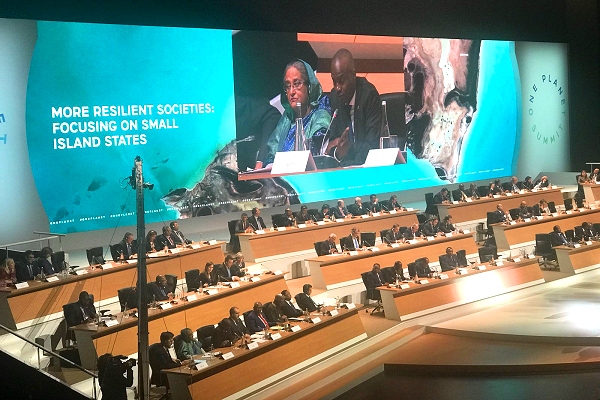 A major new global summit on climate was convened yesterday in the French capital by President Macron, UN Secretary-General Antonio Guterres, and the president of the World Bank Group, Jim Yong Kim, two years to the day after the historic adoption of the Paris agreement at the COP 21 talks.

The One Planet Summit, at the riverside La Seine Musical venue, addressed “the ecological emergency for our planet by calling together in Paris leaders and committed citizens from around the world,” organizers said.

Some 50 heads of state or government, ministers, and hundreds of CEOs, mayors, philanthropists, researchers and NGO representatives, assembled to develop “solutions, initiatives, and projects that promise to be transformative, scalable, and illustrative of the economic opportunity that such investments present.”

It’s hoped the summit will provide a boost to what are seen as currently sluggish efforts to cut carbon emissions worldwide and build resilience in the face of rising risks.

The world is “losing the battle” against climate change, President Macron told delegates in opening remarks. “We are not moving fast enough.”

Mr Guterres, in his address, said continuing to subsidize fossil fuels amounted to humanity “investing in its own doom”, but there was now an important ally: “science and technology”.

To loud applause, Mr Kim announced that the World Bank would “no longer finance upstream oil and gas after 2019”.

Other major initiatives announced in Paris, including a €9 billion climate investment plan by the European Union and further World Bank programmes, are detailed on the UNFCCC website.

He noted that while many initiatives focused on reducing greenhouse gas emissions, several also addressed the rising risks the world faces now and in the future.

“We need more of the ambition of Paris to concentrate minds on the risks already facing the most vulnerable today.

“This is not just a humanitarian imperative but also a good investment in a safer and more prosperous future.”

Van Aalst also framed a session on hydrometeorological services as part of a three-stage ‘Climate Agora’ – named after the public meeting spaces of ancient Greece and convened by the World Bank; they highlighted priorities for action on emissions, adaptation, and capacity building.

“Hydromet information is key, but weakest in the places that suffer the strongest climate impacts,” Dr Van Aalst told the agora audience.

“Red Cross Red Crescent volunteers are on the front lines of climate impacts and often lack the information they need to act early.

“But when they do get it, it can be transformational, as in, famously, the case of Bangladesh, where since the 1970s hundreds of thousands of lives have been saved thanks to early-warning systems and shelters to protect people from cyclones.”

Dr Van Aalst shared his agora session with French officials and representatives of the African Union, the UN’s Green Climate Fund and the World Meteorological Organization – an IFRC partner agency since 2013, as well as Jean Louis Dufau-Richet of mobile operator Orange, which is providing rainfall data gathered using their African networks.

He pointed out that investments in hydromet services can produce cost-benefit ratios of as much as one to seven.

“But we also need partnerships in all sectors, all the way to cities, local communities and volunteers on the ground, such as recent Red Cross forecast-based action in Togo, together with dam operators there.

“This can only be done through strong partnerships such as the Africa Hydromet Program, and it’s great to see many partners here, including the World Bank and the WMO, regional organizations like the African Union and the Permanent Interstate Committee for Drought Control in the Sahel, donors like our hosts, the Government of France, the Green Climate Fund, and last but not least the private sector.

“The IFRC stands ready to play its part, with distinctively humanitarian innovations like forecast-based financing, as was spelt out in the new climate framework we introduced at last month’s COP meeting in Bonn.”

To mark the second anniversary of the Paris agreement, the Climate Centre has over the past week run a special series of 12 tweets highlighting Red Cross Red Crescent work along climate-related themes.

Haitian President Jovenel Moise makes an opening address at the One Planet Summit in Paris. His nation recently saw the global launch of pilots of the Y-Adapt programme for engagement by young people in action on climate change and it has joined the new phase of the Partners for Resilience programme. (Photo: Climate Centre)