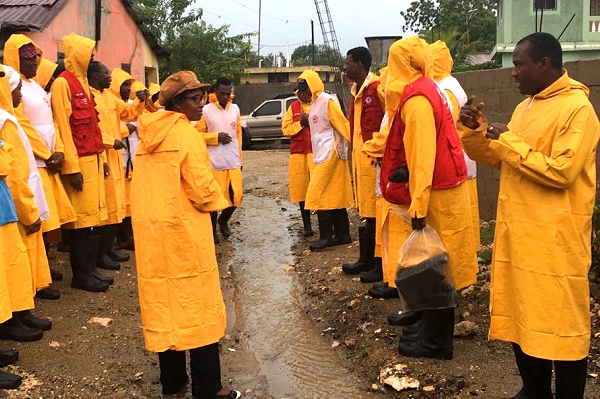 An e-learning course on climate adaptation by the IFRC’s Caribbean Disaster Risk Management Reference Centre (CADRIM) – the first to be tailored to the needs of small-island developing states – was completed last week by some 75 participants from the National Societies and disaster management agencies of the region and beyond.

Its relevance highlighted by this year’s devastating Atlantic hurricane season, the planned launch of the course in September had to be delayed by several weeks as some participants were either affected by, or joined the response to, Hurricanes Irma and Jose that month.

Entitled ‘Climate Change Awareness in Small Island Developing States’, the course was based on a toolkit initially developed by the IFRC and complemented existing regional and global publications.

Taught by experts from the Red Cross and the University of the West Indies, the course was conducted on the virtual campus of the Red Cross in the Americas, and was open to people “interested in building community resilience and learning more about the effects of climate change on [small island developing states],” an introductory flyer said.

It included webinars, interactive content, discussion forums, links to other websites, infographics, videos, a bibliography, and a self-assessment test.

In their final week, they worked on individual case studies and will now get a certificate endorsed by CADRIM and the Climate Centre.

The Caribbean is “especially vulnerable and prone to hazards of hydrometeorological origin,” the flyer says.

Seventy per cent of Caribbean people live “along threatened coastline and with its over 40 million people particularly vulnerable to disasters, the consequent destruction of natural habitat and infrastructure through sea-level rise and hurricanes is likely to endanger…Caribbean economies.”

CADRIM is hosted by the Barbados Red Cross.

Haitian Red Cross volunteers preparing for the arrival of Hurricane Irma in September. That hurricane and other recent storms “fit what we generally expect with a warmer climate: the most intense storms getting even more extreme, even in the absence of changes in overall frequency,” writes Climate Centre Director Dr Maarten van Aalst. (Library photo: @IFRC_es via Twitter)