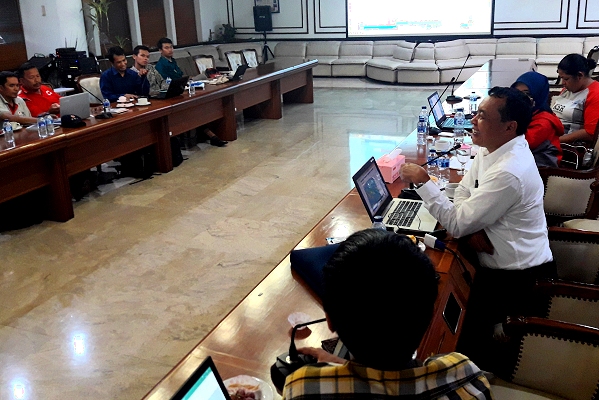 Together with the American Red Cross in Indonesia and PfR-supported Climate Centre specialists, the PMI convened training sessions for personnel from Jakarta headquarters and several nearby branches who may be engaged in addressing rainy-season hazards.

The sessions – on daily, monthly, seasonal and flood forecasts – were held at the PMI Jakarta HQ and taken by Dedi Sucahyono, a meteorologist from Indonesia’s Meteorological, Climatological and Geophysical Agency (BMKG).

Last April, as part of the ongoing ‘Greater Jakarta Resilience’ programme, supported by the American Red Cross, the PMI held a workshop for fishermen that included computer skills to help them use online government information on weather and fishing grounds.

The trainers at last Thursday’s sessions explained potential impacts on local landscapes of rainfall patterns and wind, and went into details on the climate and forecast information produced by BMKG; the significance for Indonesia of El Niño/La Niña was also explained.

The rainy season, which on average lasts to March with peak rains in February, is just getting underway in Indonesia.

The rain starts earlier in some areas, however, and it’s feared there may now be extremes before the familiar February peak, possibly exacerbated by a weak La Niña.

In a number of areas, PMI first-response command posts already receive locally gathered information on disasters which is then shared in WhatsApp groups.

“Given the trends in social media where hoax information is sometimes passed around, we had worried the information we provide might be seen as a hoax and ignored,” said Sofyan Ghazali.

West Java staff said that to assist preparedness they felt comfortable circulating information that originated with the BKMG.

The Jakarta PMI in disaster committees are now forwarding BKMB information from maritime forecasts to volunteers through a WhatsApp group.

Further PMI workshops are planned along the River Ciliwung connecting Bogor, Jakarta and West Java provinces next month, and it’s hoped they will become a regular fixture on the PMI calendar.

In a separate workshop last week in Serang City organized by Wetlands International, the Climate Centre took a session on accessing forecast and climate information from the BMKG website and a mini-workshop on affordable flood-alerting systems.

The workshop was intended to build capacity on disaster preparedness and mangrove rehabilitation for the coastal community 90km west of Jakarta, and featured input from Wetlands and CARE, both PfR partners.