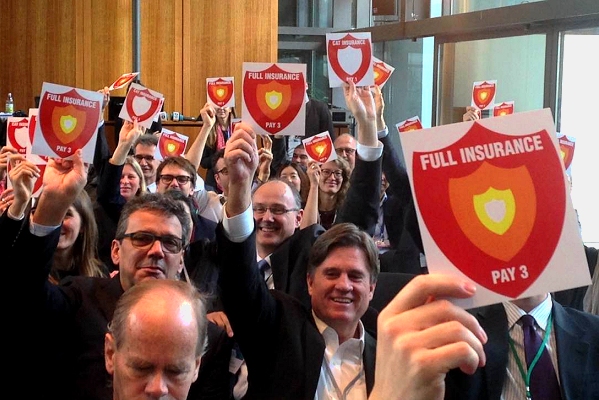 (This story appeared first on the website of the Thomson Reuters Foundation on Friday. It has been edited here for time references.)

In a time of worsening climate-related disasters, what’s the best way for a government to protect its finances and its people? Spend more on insurance and less on education and health, a potentially unpopular decision? How much insurance, and what kind?

Finding the right answer, it turns out, might require not just risk analysis and budget negotiations but a pair of oversized red and yellow dice.

At an event looking at the benefits – and risks – of using insurance to build resilience to climate change, held on the sidelines of the UN climate talks in Bonn last week, officials experimented with a game aimed at giving them a real-life flavour of the pressures.

Given a US$ 20 million budget – each million represented by one standing person – government officials, bankers, aid officials and researchers attending the session had to decide each ‘year’ how much to spend on development efforts and whether they wanted a bit of insurance as well.

Catastrophe insurance – for big disasters only – cost US$ 1 million, but a more comprehensive policy covering all disaster risks also was on offer for US$ 3 million.

After listening to its advisers – audience members waving cards suggesting one policy or the other – the ‘government’ opted for the more expensive option.

‘I have to face parliament.
You need to think carefully
before you make these decisions’

A throw of the dice, however, revealed it was a year without a disaster.

“Thanks for your wastefulness,” chided Pablo Suarez, the game’s inventor, who has developed a range of games aimed at making climate change impacts – and possible solutions – easier to grasp.

Choosing the expensive full coverage, he suggested, might look like a safe option – but also led to less cash to spend on development and slower progress in eliminating poverty, at least in non-disaster years.

That slowdown was making the finance minister of the ‘country’ grumpy, noted Samuel Maimbo, a World Bank senior adviser from Zambia, who was helping out with the game. Elections were coming in the fictitious land, he said – and enough schools still hadn’t been built.

The next year, however, the ‘government’ had an additional option on offer – a pre-approved contingency loan for small and medium disasters, which would have to be paid back with interest if used, but which cost only US$ 1 million a year.

This time, audience advisers suggested a new plan: buying both US$ 1 million in catastrophe insurance and spending US$ 1 million to arrange contingency loans.

That combination, Suarez’s calculations showed, was likely to lead to much faster rates of poverty reduction by both protecting investments while leaving more of the budget to spend on development.

Sophia Rottmann, a social scientist at the Potsdam Institute for Climate Impact Research, said the game had been an eye-opener.

“It’s a really good game to signal the difficulties in making these decisions,” she said. “At the end of the day, these are decisions about life and death for a lot of people.”

Megumi Muto, of the Japan International Cooperation Agency, noted that “finance ministers have exactly this landscape in their minds” when trying to make decisions about cutting risks. “Having to make the choice was so real,” she said.

Suarez said having fun was half the battle in helping people learn about risks – not least because no one in the audience was asleep or checking their mobile phone while playing the game.

“Fun is functional,” he said. “Games can help people engage. Brainpower gets engaged when you take actions with consequences.”

Fatou Assah, one of the participants who also works for the World Bank, said it wasn’t hard to see how very similar scenarios must play out in real government offices.

The game “gives you a sense of what’s at stake”, she said. “You can lose it all. If you’re the minister of finance you realise the money has to come from my budget and next year

“I have to face parliament. You see you need to think carefully before you make these decisions – or you may lose your job.”