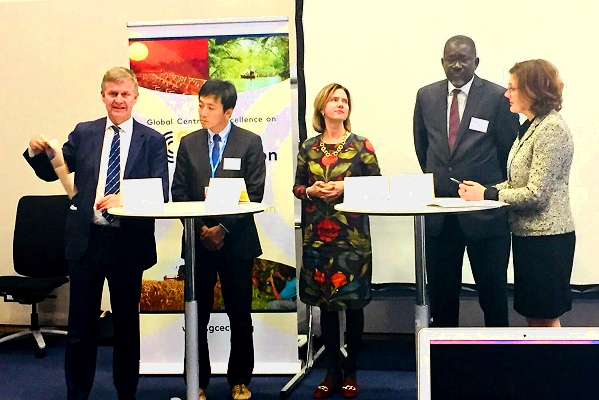 (*This story appeared first last week, before the GCECA was launched, on the Thomson Reuters website under the headline, ‘What is the best way for countries to adapt to climate change?’ The time reference has not been edited here.)

As the world’s climate changes faster and faster, the question of how people and countries can best adapt to the growing number of droughts, floods, storms and sea level rises, is being asked at the UN climate talks here in Bonn.

The Paris Agreement includes the goal to adapt societies to a changing climate, which comes after years of attempts to stabilize the Earth’s climate by curbing the amount of planet-warming emissions.

Experts say we’re now living in an already changed climate punctuated by severe droughts and powerful storms, and the need to adapt is urgent.

Most countries who submitted plans on tackling climate change ahead of the Paris Agreement included a national adaptation plan.

So what is the best way for countries to adapt? And how can they measure progress, so they can plan and prioritise the best ways to protect communities, cities, infrastructure and economies from extreme floods, winds and drought?

‘We’re all going to have to adapt
whether we like it or not, if we’re living in
the US, Bangladesh or the Netherlands’

“It’s about value for money…people want to know if it’s being spent well or not,” Saleemul Huq, director of the Dhaka-based International Centre for Climate Change and Development, said on the sidelines of the UN talks.

The difficulty with measuring adaptation, though, is that each project is so specific to its own context, that they are hard to compare, he added.

“But we can bridge that by using human beings as a measurement,” said Huq.

“To me the metric that matters is how we are improving their ability to adapt to climate change. It’s about investing in humans, especially the vulnerable,” he said.

Governments alone cannot transform societies to adapt to climate change – the private sector is crucial to this process, said Craig Davies, head of climate resilience investment at the European Bank for Reconstruction and Development.

“We’ve seen important work on this,” in a move by some of the world’s leading banks to assess the risks and opportunities they face in the context of a changing climate, he said.

Investors are not only concerned with short-term profits he said – those who invest in pension funds, for example, are very concerned about the long-term future, Davies said.

“Tracking finance is hugely important but…we’ve also got to find ways to report the outcomes,” he added.

Next week, a new centre studying this will open in the Netherlands: the Global Centre of Excellence on Climate Adaptation (GCECA), with the support of the Dutch government, UN Environment Programme, and the National Institute for Environmental Studies, Japan.*

It will seek out best practices on how cities, infrastructure and transport, food, water, energy and health systems can adapt.

“Excellent knowledge, excellent practice, whatever it is that can inform good adaptation,” said Christiaan Wallet, operations director of the new centre.

“We want to make sure the best input is made available for those who need it,” he said.

Part of this is to bring together groups who have been researching and building up experiences about adaptation.

“To maximise impact, we need to break down silos and get people sharing knowledge,” said Davies, who has helped set up the centre.

Some of that knowledge could come from non-governmental organisations, who can share their experience of working with communities on the front line of the changing climate.

“We work with communities to identify their risks and vulnerabilities,” and help farmers and herders adapt their agriculture, landscapes, and find new sources of income if necessary, she said.

Their voices need to be heard at higher levels, and lessons learnt from their experiences shared, she added.

“We’re all going to have to adapt whether we like it or not, whether we’re living in the United States, Bangladesh, or the Netherlands,” said Huq.

“Bangladesh realised this much earlier than anywhere else. It is now one of the most resilient and adaptive countries in the world, and the rich (countries) can learn a hell of a lot from us,” Huq said.

At yesterday’s launch at COP23 of the new Global Centre of Excellence on Climate Adaptation, IFRC Secretary General Elhad As Sy stressed that early action can help communities deal with shocks and stresses and adapt to climate impacts. The Netherlands Minister of  Infrastructure and Water Management, Cora van Nieuwenhuizen, is on his immediate right. (Photo: Climate Centre)