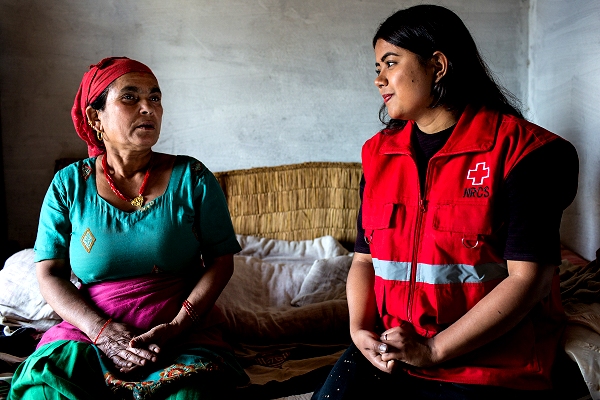 The Lancet Countdown – the UK-based international medical journal’s annual assessment of links between climate change and human health – was launched today with events around the world, including at the Royal Society of Medicine in London.

The report finds “impacts of climate change are disproportionately affecting the health of vulnerable…people in low-income and middle-income countries.

“By undermining the social and environmental determinants that underpin good health, climate change exacerbates social, economic, and demographic inequalities, with the impacts eventually felt by all populations.”

Leading the examples it gives is evidence that exposure to “more frequent and intense heatwaves is increasing”, with some 125 million more vulnerable adults exposed to such events in the past decade and a half.

‘There is evidence of a recent turning point’

The most recent analysis by the World Weather Attribution group, which includes the Climate Centre, confirmed that human-caused climate change played an important role in the excessively high temperatures that gripped much of western Europe in June.

The Lancet authors report that the frequency of weather-related disasters has increased by 46 per cent since 2000, but with the absence of a clear trend in their lethality “potentially suggesting the beginning of an adaptive response to climate change”.

They add, however, that the impacts of climate change are projected to intensify over time, and current levels of adaptation will not be enough.

Economic losses from climate-related events have also been increasing since 1990, totalling US$ 129 billion in 2016, with virtually all losses in low-income countries uninsured.

Changing climate conditions are contributing to increased transmission of dengue fever by the Aedes aegypti mosquito, which thrives in warmer, wetter conditions, reflected in the growth of dengue of 9.4 per cent since 1950.

The Lancet scientists write: “If governments and the global health community do not learn from the past experiences of HIV/AIDS and the recent outbreaks of Ebola and Zika viruses, another slow response will result in an irreversible and unacceptable cost to human health.”

The Lancet’s new climate review – compiled by 24 academic institutions and intergovernmental agencies – was initiated after its 2015 commission concluded that man-made climate change threatens to undermine the last 50 years of gains in public health, while a comprehensive response to climate change could yet be the greatest global health opportunity of the 21st century.

It tracks indicators in five domains: exposure and vulnerability to climate impacts, adaptation and resilience, health benefits from mitigation, economics, and public and political engagement.

Welcoming the report, Climate Centre Director Maarten van Aalst said: “It’s encouraging to see our special concern for the most vulnerable reflected by this leading group of researchers.

“This report also includes several important references to conflict zones, where we have repeatedly seen that the impacts of droughts, floods, storms and disease are magnified.”

The heatwave threat has been a focus of the Red Cross Red Crescent Movement and its scientific advisers over the past year.

In August, for example, a new paper by Climate Centre and IRI scientists proposed a formal heatwave definition for Bangladesh – a first step towards the creation of a heatwave warning system in a country that currently doesn’t have one.

A unique five-day training experience in June by the Indian Red Cross Society, meanwhile, involved flash mobs throughout Delhi run by young staff and volunteers informing people how to prepare for heatwave temperatures that were then hitting the low 40s°C.

The Lancet Countdown says the “voice of the health profession is essential in driving forward progress on climate change and realising the health benefits of this response”.

The review argues that health professionals can and must communicate both threats and opportunities to the public and policy-makers, while ensuring climate change is understood as central to human well-being.

“Although progress has been historically slow,” it adds, “there is evidence of a recent turning point, with transitions in sectors that are crucial to public health reorienting towards a low-carbon world.”

Sindhulpalchowk, Nepal, March 2017. Dr Mausam, the Nepal Red Cross Society’s Head of Health, listens to a resident’s account of health issues facing her community. The main problem is access, says Dr. Mausam. “The conditions of the roads, especially in the monsoon season, make it disadvantaged. When there is a patient in need of emergency transport, it is very challenging to have them access local health care or be transported to a hospital.” Recent modelling shows that in South Asia, climate change is likely to lead to a more intense monsoon over land due to air there warming more than air over sea. (Photo: Marko Kokic/Canadian Red Cross via IFRC)