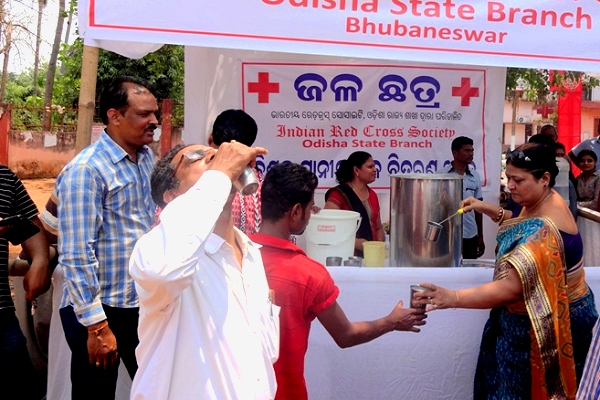 The Indian Red Cross Society (IRCS) and the Indian Meteorological Department (IMD) began working closely together on heatwave forecasts earlier this year to reach out to vulnerable populations.

This is a continuation of its work on integrated risk management as part of the Partners for Resilience (PfR) programme, which combines community-based risk reduction with weather and climate information as well as ecosystem management.

The IMD sees the Red Cross as its last mile of outreach to disseminate information on preventive measures after heatwave forecasts in both rural and urban areas.

In March this year, the IRCS took part in a national workshop on state-level heatwave preparedness in India jointly organized by the IMD and the Indian Meteorological Society.

The Red Cross had earlier worked closely with the IMD in the city of Pune to prevent heatwave deaths.

Last June the National Society ran its first flash mobs as a way of public communication on prevention measures during heatwaves, as temperatures in Delhi climbed into the mid-forties Celsius.

The IMD said that it will be issuing “impact-based forecasts” to help get clear messages to vulnerable people.

Heatwaves have assumed particular significance in India, and meteorologists project more intense such events due to climate change.

The Indian Red Cross reports that the 2015 “silent killer” heatwave caused the deaths of some 2,500 people.

Indian Red Cross personnel on the streets of the Odisha state capital, Bhubaneswar, earlier this year, where they gave out free drinking water to people amid the country’s latest dangerous heatwave. The National Society plans to closely partner with meteorologists and municipalities to reach out to vulnerable people as heatwave temperatures are set to soar over the coming years. (Photo: IRCS)