Opinion: Are the media now carrying the torch on climate? 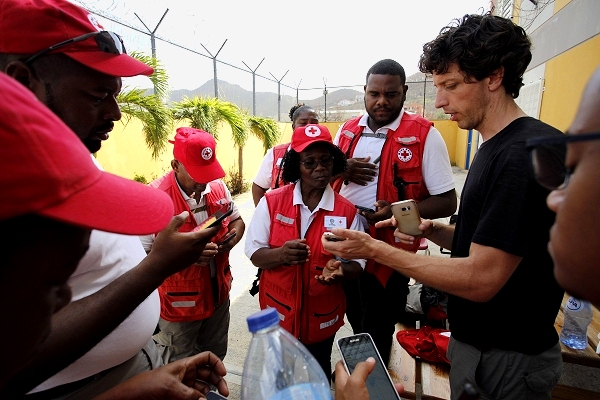 Besides each other, we in the humanitarian sector rely, broadly speaking, on three professional communities to push action to address the rising risks of climate change. (Since The Day After Tomorrow* one could perhaps add a fourth: Hollywood.)

Scientists were the first to sound the alarm, of course, and their research began to be formally collated by the UN in 1988 with the inception of the Intergovernmental Panel on Climate Change (IPCC).

They continue to do so with the relatively new work on “climate attribution”, including the World Weather Attribution initiative.

Politicians’ year of peak involvement at the global level, secondly, was clearly 2015, when the historic Paris agreement was adopted by overwhelming consensus.

But after the extraordinary recent events in the southern US and the Caribbean, not to mention the still-more catastrophic South Asian monsoon, and the coverage they received, I’ve been wondering whether it may not be a third group now carrying the brightest torch on our issue: the media.

By “media” I mean the mainstream news media; not just outlets that, as it were, have always had a dog in the climate fight.

One of the favourite battle cries
of journalists everywhere:
‘The public want answers’

Take the Economist as an example, although there are many. Not that long ago I personally would have put this most intelligent of news magazines at the cautious end of the spectrum on the climate issue. Yet earlier this month, as the floodwater rose in Houston, it fired a leader-column broadside against “short-sighted” governments everywhere its editors believe are generally not doing enough – to protect, to plan, to insure, to mitigate.

It concluded that “politicians and officials who fail the test [the test of climate change, that is] need to realise that, sooner or later, they will wake up to a Hurricane Harvey of their own.”

In the Red Cross Red Crescent we are bound by our principles to eschew political controversy and would typically shrink from using such forthright language. But I will not pretend to have shed any tears when I read those words in the august columns of the Economist.

Specifically on the Caribbean, another Economist story said governments had failed to do much of what’s needed to make islands more resilient: “Building codes written with the storms of yesteryear in mind [for example] are spottily enforced.”

Or take this 19 September report on CNN, with a headline lifted straight from the attribution scientist’s playbook: “Yes, climate change made Harvey and Irma worse.”

This entire piece, in fact, pivoted around attribution – the degree to which the intensity or likelihood of a particular extreme event can be attributed to climate change, quoting (from the mouth of Climate Central’s Sean Sublette) one of the favourite battle cries of journalists everywhere: “The public want answers.”

A detail in this piece that caught my eye was that CNN invoked their own on-screen meteorologist: “Are Irma and Harvey affected by climate change? Absolutely,” said Brandon Miller, who we’re told has studied global warming for more than a decade.

“But everything in the atmosphere now is impacted by the fact that it’s warmer than it’s ever been,” Miller adds. “There’s more water vapour in the atmosphere. The ocean is warmer. And all of that really only pushes the impact in one direction, and that is worse: higher surge in storms, higher rainfall in storms.”

“Sandy would probably not have flooded Lower Manhattan had it occurred 100 years earlier,” he argues, “when sea levels were about a foot lower in New York.”

Professor Emanuel also makes what for us is the critical point that natural disasters are always a combination of nature and, in our language, people’s level of vulnerability and exposure – also a human construct.

“Citizens of all political persuasions should demand that their representatives attack both these problems lest we condemn our children and their descendants to increasing incidence of the kind of misery now being experienced in Texas, Florida and the Virgin Islands,” thundered the respected MIT professor.

But welcome though this discernible change of media tone is, it only encompasses part of our case; it is only part of the humanitarian story.

Inevitably, national media serve national audiences, and these pieces and others tend to focus on a single event, or series of events, and may skirt over the immense differences in vulnerability between countries and regions.

Had Irma directly struck Haiti, for example, we would be in a completely different world in terms of human impacts; even in better-off countries, some groups are affected much more severely than others.

Another key point we have been making for years, to anyone who will listen, is that responding afterwards is not enough.

Risk reduction – through planning and infrastructure as well as early and better preparedness, warning and response – are more necessary than ever to meet the rising and unpredictable risks.

Crucially, these efforts need to be focused more deliberately on the most vulnerable, for whom the rising risks are worst.

Here I would humbly submit that, with some success, we in the Red Cross Red Crescent have been doing our best to heed our own rallying call.

A topical example. The first information bulletin on Hurricane Irma from our parent body, the International Federation of Red Cross and Red Crescent Societies (IFRC), was issued on 1 September, nearly a week before the storm slammed into Barbuda at almost peak intensity.

Sparing details here, but this encyclopaedic document made it clear Red Cross societies throughout the region were as ready for Irma as resources permitted; they would not be, and were not, taken by surprise.

As Hurricane Maria followed Irma along what could almost have been a pre-ordained corridor of destruction, my own National Society, the Netherlands Red Cross (NLRC), was able almost immediately to mobilize regional response teams (that’s teams plural) from Curacao and Aruba to help people on St Maarten.

NLRC 510 Global volunteers crunched data, analysed photographs and created maps of impacts so we could target our response efforts on the ground.

I’m especially pleased that, in addition, we in the Climate Centre assisted the meteorological service covering three Dutch islands in framing and disseminating an official hurricane warning.

There is more to be done, much more, and one of the strongest arguments for better risk reduction – long a humanitarian imperative – is that it makes economic sense. Investments are recouped in reduced costs of response, recovery and reconstruction.

It is also, by the way, what countries have pledged under Paris: solidarity in the face of the rising risks we’ve all created and that we all need to face together.

Maarten van der Veen of the Netherlands Red Cross 510 Global team distributes mobile phones to Red Cross volunteers from Aruba, Curacao and St Maarten itself for use in collecting data and pictures of the damage inflicted by Hurricane Irma. (Photo: Arie Kievit/NLRC via IFRC)