To predict floods in Africa, check forecasts for extremes and river basins, not total rain in a season, say scientists 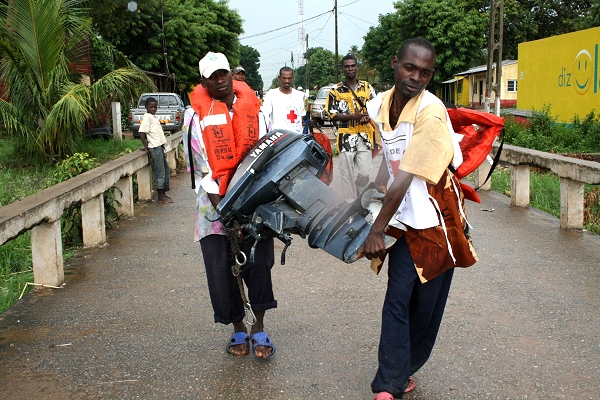 ‘Seasonal forecasts’ that make general statements about above- or below-average total rainfall over the course of a season are not the best predictor of flood risk in sub-Saharan Africa, a team of climate scientists argue.

“Humanitarians have been investing significant attention and resources in the uptake and use of climate services to [assist] disaster risk management,” they argue in a new paper entitled Should seasonal rainfall forecasts be used for flood preparedness?

But the forecasts of total seasonal rainfall that these services include “have yielded mixed results” when used to address flood risk in Africa by, for example, positioning humanitarian relief items or evacuations.

Using their own methodology to assess indicators of past seasonal flooding across sub-Saharan Africa, and compensating for a lack of reliable data, the scientists say their results demonstrate that in western, central, and eastern Africa – regions with wet climates – “even a perfect…forecast of seasonal total rainfall would provide little to no indication of the seasonal likelihood of flooding”.

It turns out to be extreme events within a season that show the highest general correlation with propensity to flood.

Floods in the wetter climates of western and central Africa and Madagascar showed the strongest relationship with rainfall intensity.

Patterns of rainfall, such as the distribution of dry spells, were the least related to floods.

They recommend two main changes: replacing seasonal forecasts with forecasts of extremes, and looking at forecasts for areas that correspond to natural features like river basins and flood plains, rather than arbitrarily drawn ‘grid boxes’, as at present.

The scientists say this could be done relatively easily “and encourage regional-scale disaster preparedness”.

“What is and is not a humanitarian disaster is ultimately a human question as much as a meteorological one,” said Erin Coughlan de Perez, Manager, Climate Science at the Climate Centre and the lead author of the study.

“So disaster managers can support forecasters by giving us the best feedback they can on the weather and ground conditions that trigger ‘disaster’, meaning a requirement for humanitarian intervention.

“This can help us develop forecast products that provide precise information about these thresholds and enable humanitarian agencies like Red Cross Red Crescent societies to prepare.”

Forecast-based financing initiatives, supported by Germany are underway globally, the paper recalls, with the aim of “taking action and releasing financing proportional to the risk information in a forecast, before the potential disaster”.

This study was part of a research project supported by the UK government on the use of forecasts for decision-making in Africa.

An aquatic rescue team from the Mozambique Red Cross prepares for a drill on the flooded Buzi river in 2008. It’s river basins like the Buzi’s that a team of climate scientists say forecasters should focus on, rather than arbitrary boxes on maps, to try to predict flood danger in sub-Saharan Africa, so humanitarians can make the best use of scarce resources to get ready. (Library photo: Alex Wynter/IFRC-Climate Centre)