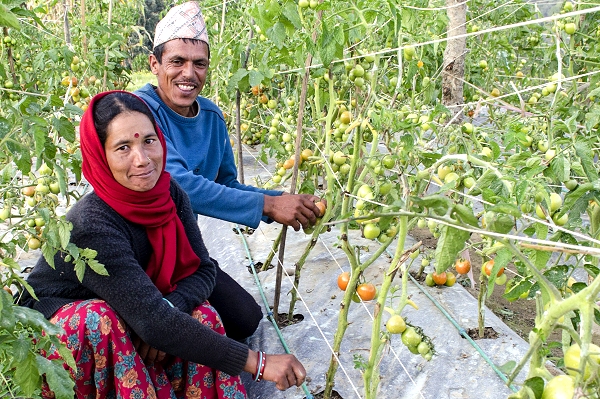 The global UK-supported programme known as ‘BRACED’ that builds resilience in parts of the Sahel, East Africa and Asia badly affected by climate-related disasters like droughts, floods, landslides and storms today issues a major progress report on the experience of its first two years of operation.

On average, nearly 3 per cent of the whole population of the programme countries – Burkina Faso, Chad, Ethiopia, Kenya, Mali, Mauritania, Myanmar, Nepal, Niger, Senegal, South Sudan, Sudan and Uganda – are affected by climate extremes in any one year.

The programme, ‘Building Resilience and Adaptation to Climate Extremes and Disasters’, has been working with local implementing partners to assist up to 5 million vulnerable people; projects are designed to improve nutrition and diversify incomes through improved agriculture, forestry, food storage, water and soil management, and local finance.

Livelihoods based on natural resources are particularly vulnerable to climate impacts, and BRACED aims to promote climate resilience and sustainability in farming.

‘Building trust in forecasts
has been central to BRACED’

Harina Devi Khatri, her husband Bishnu and their three children grow vegetables in Nepal’s western Hirapur Doti district, where possibly the most serious difficulty they face is a lack of clean water, outside the monsoon season, that forces women to spend many hours fetching and carrying.

As part of the local BRACED project called ‘Anukulan’ (Hindi for adaptation), they introduced new ways of cultivating such as mulching, which helps the soil retain water, and efficient drip-irrigation, as well as better pest control; they’re now linked to a collective marketing service also established through Anukulan.

Harina increased family income from potatoes alone from US$ 200 a year to just over US$ 700, and the extra money allows her to spend more on the children’s education and nutrition, as well as invest and save.

Their story is one of a collection of case studies in the BRACED report, entitled Resilience Exchange, released at the end of the second year of its three-year span.

As its name suggests, climate – with a special emphasis on gender – has taken centre stage in projects for BRACED, which sees ‘resilience’ as the capacity to adapt to, anticipate, and absorb climate extremes and disasters.

The Resilience Exchange report finds that climate shocks “can be more easily managed with on-time, reliable climate and weather information”, although this is often hard for users to understand and use.

“Building trust in forecasts and their continued provision has been central to BRACED,” the report adds, and now a key challenge is ensure adequate investment in “user-oriented climate services”.

Climate shocks and stresses vary from place to place: while countries like Burkina Faso and Mali face predominantly the same type of hazard, Nepal, Ethiopia and Uganda have a varied profile of risk.

But overall, the Resilience Exchange document says, “droughts have had the most severe negative consequences, especially in Africa.”

It also emphasizes that women are often confined to reproductive tasks, low-yield cultivation, and livelihoods that are particularly vulnerable to climate impacts.

“In parts of Uganda, Kenya and Myanmar,” for example, “women’s lack of control over productive assets, including land, restricts their ability to cultivate more varied crops, manage their access to natural resources or diversify their livelihoods.”

BRACED consortia across 13 countries aim to compensate for gender imbalances to increase greater equality and resilience.

“We saw very recently with the huge mudslides in Sierra Leone and the floods across South Asia how climate-related disasters can have such an utterly devastating impact on vulnerable countries,” said Dr Maarten van Aalst, director of the Red Cross Red Crescent Climate Centre and head of the BRACED knowledge-management consortium charged with marshalling lessons learned in the programme.

“As the climate gets more erratic, our work to manage these risks becomes more complicated and the impacts on people increase. In some countries conflict is a further multiplier.

“Through BRACED, the body of evidence about what works to strengthen resilience has expanded measurably, while in the field our partners strive to ensure that evidence is put to good use.

“We also think of BRACED work as an important contribution in spirit to the Red Cross Red Crescent One Billion Coalition for Resilience,” added Dr Van Aalst, whose specialist reference centre is a delegated function of the IFRC.

‘1BC’ – a global initiative to build new partnerships to support resilient communities – was first announced by the IFRC in 2015 at the World Conference on Disaster Risk Reduction in Sendai, Japan.

As a concept, resilience features in three other international frameworks agreed that year or last: the UN global goals, the Paris agreement on climate, and the humanitarian summit in Istanbul.

Nepalese vegetable farmers Harina Harina Devi Khatri and her husband Bishnu practice on their new drip-irrigation system, supported by BRACED. Harina increased the family income from potatoes alone from US$ 200 to just over US$ 700. Their story is among a series of similar case studies in a new report charting the achievements of the BRACED programme at the two-year mark.(Photo: Bimala Rai Colavito/BRACED)