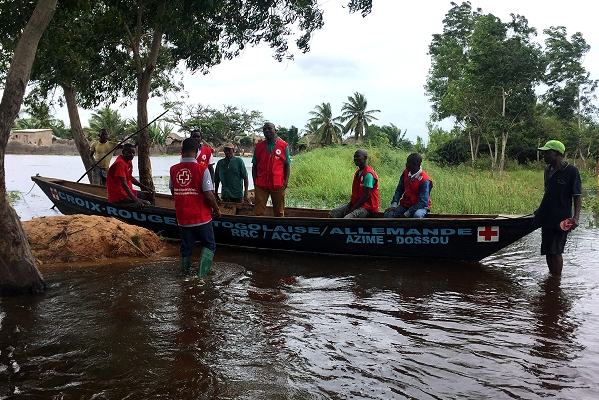 TRC volunteers and staff – including the society’s president – distributed emergency-shelter items for just over 100 households from the village of Togbavi, in Lacs prefecture, in coastal Maritime region.

The families had been driven out of their homes by rising water-levels and set up camp on elevated highways.

The TRC was also engaged in preparing evacuation sites, and it delivered two canoes (photo) – one for Togbavi and one for Azimé Dosou village – to facilitate possible evacuations.

Monday’s distribution included, for each household, a tarpaulin and a mosquito net, two sleeping mats, as well as buckets and soap.

It was the latest stage in an FbF sequence that was triggered two weeks ago by alerts from dam operators and the hydrological ‘FUNES’ prediction system, which the Togolese and German Red Cross has been helping to refine.

‘My house is totally flooded’

“On behalf of the community we thank the Togolese and German Red Cross for this assistance, most of all for the canoe, which will help us cross the waters and evacuate people safely,” said Togbavi Chief Gbedassi. “We will keep it well maintained and use it properly.”

Said beneficiary Adjovi Togbegan: “This help has come right in time as my house is totally flooded. The tarpaulin will cover our temporary hut and keep us safe from rain, and we sleep now under the mosquito net which will protect us from malaria, especially the children.”

In collaboration with dam operators, the Togolese and German Red Cross team has been closely monitoring discharge rates and water-levels at the dam for weeks.

In a daily conference call, the Red Cross gets data on the actual volume of the lake above the dam, water flowing inwards, and planned discharges through the dam.

Staff then monitor water levels in nearly 20 high-risk villages and a further 11 in a second category of risk.

In late August, in its first FbF operation of the current rainy season, the TRC distributed Aquatabs and waterproof protection for household documents to just under 2,000 at-risk households in the first group.

FbF work in Togo, in collaboration with the Climate Centre, sits within the ‘Climate Change Adaptation/Disaster Risk Reduction’ project that is financed by Germany’s Federal Ministry of Economic Cooperation and Development and the German Red Cross.

Implemented by the Togolese Red Cross, it includes all five regions of the country, with a focus on flood-prone areas downstream on the River Mono.

Last week, “at a critical moment with the Mono raging”, as one local report put it, and with discharge rates from Nangbeto increasing, the TRC took delivery at a ceremony in Lome of 12 motorcycles funded by the project to help volunteers move around in flooded areas.

That ceremony was attended by Domenica Preysing, the First Secretary and Head of Cooperation at the German embassy in Togo.

With the monsoon season extending into October, the German-supported TRC operation to address the flood danger is continuing this month.

Togolese staff and volunteers distributed humanitarian relief to beneficiaries in villages in Lacs prefecture in their latest FbF operation to address flood risk in the West African monsoon. They also handed over canoes (pictured) to help Red Cross responders move around. Monday’s operation was the second of its kind in two weeks. (Photo: Andrea Kehrwald/DRK)