Op-ed: ‘I am more angry than sad. The world should be angry too’ 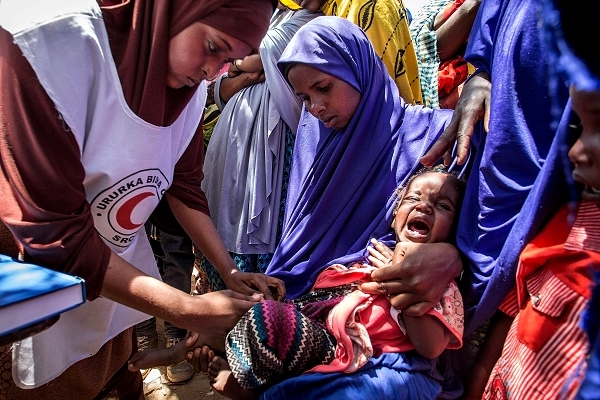 (Dr Fatoumata Nafo-Traore is head of the IFRC’s Africa region. This opinion piece was first published this month by Project Syndicate. Scientific studies of droughts in Somalia, most recently, Kenya, Ethiopia and Brazil conducted are available at the Climate Central website.)

Nairobi: The scale of human suffering currently engulfing drought-stricken Somalia is almost indescribable. It is difficult to find words to convey the devastation and misery gripping the country, now in the midst of a prolonged period of record-low rainfall.

I have watched emaciated herds of livestock drop, lifeless, into the dust, and been present when people’s futures evaporated in front of their eyes.

But if words cannot do justice to the magnitude of the crisis, they can guide the world’s response. And in that regard, let me be unequivocal: unless the international community overhauls its approach to delivering aid in Africa, the cycle of suffering will continue

Somalia’s current catastrophe is not unique. Millions of Africans, in more than a dozen countries, are facing similar struggles, as failed harvests and persistent conflict fuel severe food insecurity.

By some estimates, East African farmers have lost up to 60 per cent of their livestock – their main source of income – in the first half of 2017. In the face of such overwhelming hardship, I am more angry than sad.

The world should be angry, too. So many proud and dignified people have been stripped of their livelihoods and forced to rely on one tiny meal a day, or nothing at all. Worse, these tragedies were avoidable; we knew these crises were coming.

Drought and hunger are slow-motion calamities that, with adequate planning and sufficient resources, can be averted. But time and time again, humanitarian assistance in Africa has come up short, as it did in Somalia in 2011 and 2012; in Niger in 2005; and in Ethiopia during the 1980s.

Then, as now, food insecurity was predicted long before the first hunger pangs were felt. But the warnings did not yield an effective global response.

As a medical doctor, I am acutely aware of how hunger, malnutrition, cholera, and other drought-related illnesses affect Africans, especially young children and nursing and expectant mothers.

The effects of hunger on physical and mental health can be irreversible, and often keep people locked in a lifetime of poverty. We must alter this trajectory, before the next crisis strikes, by converting anger into action.

For starters, the aid community must be smarter about how it solicits and allocates resources like food and funding. Humanitarian organizations like mine have always operated with limited human and financial resources, and have been expected to do more with less.

But isn’t it time we do more with more? The United Nations estimates that Somalia, Nigeria, Yemen, and South Sudan will need a combined US$ 6.3 billion this year to avoid widespread famine.

So far, with half the year gone, only about a third of this sum has been raised.

Moreover, and perhaps most important, international aid organizations must rethink how and with whom they work. More emphasis needs to be placed on building lasting solutions, and that means working more closely with local partners on the ground.

This is not a new idea, but it is a solution that has not yet stuck.

Local actors are best positioned to reach the most vulnerable and marginalized members of any community. Strong local actors are critical to sustaining services long after multinational aid agencies have turned their attention elsewhere. What local constituents need is the resources and capacity to take the lead.

Unfortunately, at the moment, only a fraction of international emergency funding goes directly to local agencies. Worse, there is little dedicated support available for helping local organizations grow and mature.

Because of these shortcomings, multinational organizations often find it difficult to hand over responsibilities once the most urgent needs have been met.

When local responders are supported in leadership roles, the results are exceptional. In Somalia, for example, the Somali Red Crescent Society has established dozens of mobile health clinics (photo) capable of serving some of the country’s most vulnerable populations.

The Red Crescent, which operates in areas of instability and violence that are often off limits to government health services, has helped reduce the severity of malnutrition and cholera emergencies.

Best of all, when such emergencies abate, local capacity remains. Thanks to funding and training offered by my organization and others, the Somali Red Crescent will provide, on a continuing basis, maternal and child health support, vaccination programmes, outpatient clinics, and other forms of community-based health care.

This is just one example of the positive role that local humanitarian actors can play when fully empowered.

Changing the global humanitarian paradigm will not be easy; change on this scale never is. But the alternative – an endless cycle of hunger, disease, and needless death – is unacceptable.

Africa’s suffering has left many speechless. That is why our actions must speak louder than our words.

In Dilla and Gabiley villages in Somaliland, where the Red Crescent has built wells for both people and animals, a mobile clinic visits the villages every two weeks to provide health care services. Throughout the area most wells have dried up and more than half the cattle have died. (Photo Arie Kievit/Netherlands Red Cross via IFRC)