Defining and predicting heatwaves in Bangladesh 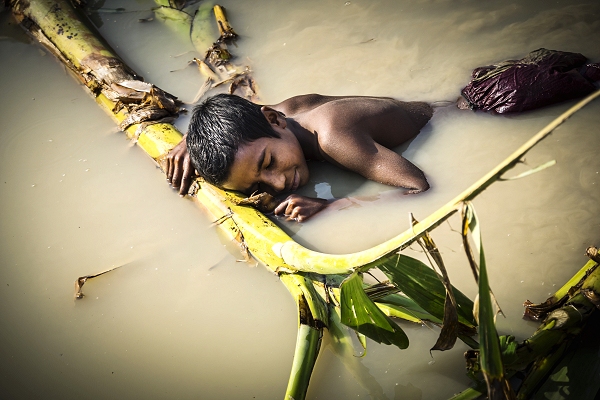 (This story, together with illustrative graphics and video, appeared first earlier this week on the website of the International Research Institute for Climate and Society, the IFRC’s forecasting and science partners. It has been edited slightly here for length.)

In the United States, extreme heat events have killed more people in the last 30 years than has any other weather-related phenomenon. In Europe, at least 136,835 people died due to heat-related health complications between 2000–2016, which represents more than 87  per cent of all disaster-related deaths in that area.

Because of heat’s danger, the US and many other countries in the mid-latitudes have invested in warning systems, awareness campaigns, cooling centers and other measures to lessen the human health toll.

However, the thresholds that trigger such actions can vary by country, state or even city. A threshold incorporates temperature and sometimes other climate variables, such as humidity.

In order to avoid the threshold being triggered solely by high temperatures, it’s also often based on how conditions have affected people in the past by incorporating mortality data. This ensures that warning systems – and the resources spent to enact them – target the exact conditions that put people’s lives at risk.

In tropical countries such warning systems are rare, in part due to the assumption that people living in the tropics are more acclimated to hot weather and thus less likely to be affected by extreme heat events.

However, heatwaves are also likely taking a high toll in developing countries and not getting the attention they deserve, according to international disaster reporting. This is partly because quality health data are harder to come by in countries with fewer resources.

Hannah Nissan, a postdoctoral research fellow at the International Research Institute for Climate and Society, is trying to fill in this information gap. Nissan is the lead author on a new paper that proposes a heatwave definition for Bangladesh – a first step towards the creation of a heat warning system in a country that currently doesn’t have heatwave forecasts.

Before defining a heatwave, however, Nissan and her colleague Katrin Burkart at Columbia University’s Mailman School of Public Health first examined the health impacts of heat in Bangladesh.

They found that heatwaves do indeed lead to more deaths in the country. They estimated that during an eight-day heatwave in 2008, for example, at least 3,800 people died from the excess heat. Two-thirds of those killed were 65 or older, indicating that the elderly are especially vulnerable to heat waves.

Heat-related illnesses are also a significant issue, but they are much harder to investigate because of a lack of health data.

Evidence from around the world points to a suppression of economic productivity during heatwaves, and to occupational heat-health problems in sectors working outdoors as well as in industry.

Similar research has so far largely been lacking in Bangladesh, but nearly half of Bangladesh’s workforce is employed in the agriculture sector and many work in factories, with the garment industry employing 4 million people — over half of whom are women.

Once the relationship between heat and human health is established for an area, as Nissan and Burkhart have recently done in Bangladesh, climate scientists can look for opportunities to predict extreme heat events in a way that can be useful to decision makers.

In their new paper, Nissan, Burkart and other colleagues from IRI and the Climate Centre propose a heatwave definition for the country and assess the potential for heat wave forecasts across various timescales.

Using their definition, the authors calculate that death rates rise by about 20 per cent on the days that meet or surpass the threshold. Their threshold definition is also based on the ability of the heatwave conditions to be predicted.

In this case, the paper’s authors found potential for predicting heatwaves a few days to a few months ahead of time by looking at wind conditions, precipitation and soil moisture.

If an early-warning system is in place, decision makers can take actions with timing that makes sense given the forecast period.

Recognition of the enormous human cost exacted by heatwaves underpins a growing momentum in the international community to support the development of heat action plans and early warning systems worldwide.

Ahmedabad, a city in Gujarat province in western India, has been developing a heat early-warning system for the last five years.

While no such early-warning system exists yet in Bangladesh, the work of Nissan and colleagues could help pave the way for one, particularly given their finding that heatwave predictability exists from a few days to several weeks in advance.

“In a changing climate, heatwaves are among the most rapidly rising risks, especially affecting the most vulnerable,” said Maarten van Aalst, director of the Climate Centre, an adjunct researcher at IRI and a co-author of the study.

“There are many simple actions we can take to reduce the impact heatwaves have on people, but we rely on good warning systems, and public awareness.

“Studies like these are critical to fill these gaps, especially in highly vulnerable countries such as Bangladesh, where the need is highest.”

Said Nissan: “In lots of places, health data are unavailable to do the type of analysis we’ve been able to do in Bangladesh.

“In other areas, we might know that heat is dangerous but not be able to predict heatwaves with any skill…There is an opportunity here for Bangladesh to become a pioneer in the region for evidence-based climate services that improve public health.”

A Bangladeshi boys cools off in a river. A country with one of the world’s most admired warning and evacuation systems for cyclones now has an opportunity to expand its life-saving infrastructure to include the heatwave threat. (Library photo: Yoshi Shimizu/IFRC)