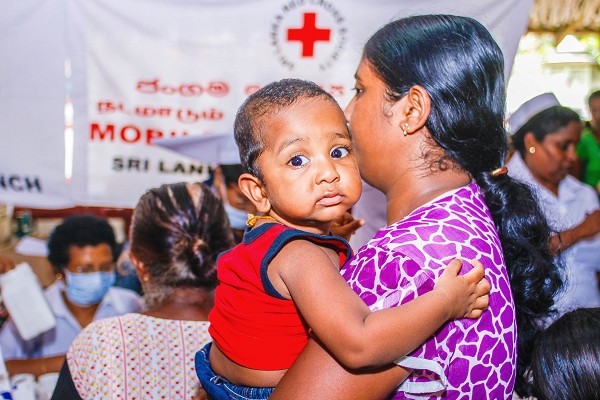 (This story is a press release issued yesterday jointly in Colombo and Geneva, and at the IFRC’s Asia-Pacific office in Kuala Lumpur.)

As the number of dengue cases tops 100,000 in Sri Lanka, the Sri Lanka Red Cross Society and the IFRC are rapidly scaling up emergency assistance to help contain the country’s worst-ever outbreak of the mosquito-borne viral disease.

Dengue patients are streaming into overcrowded hospitals that are stretched beyond capacity and struggling to cope, particularly in the country’s hardest hit Western Province.

Sri Lanka’s Ministry of Health reports that the number of dengue infections has climbed above 103,00 since the start of 2017, with 296 deaths.

The number of cases this year is already nearly double the number of dengue infections recorded in all of 2016, when 55,150 people were diagnosed with the disease.

“Dengue is endemic here, but one reason for the dramatic rise in cases is that the virus currently spreading has evolved and people lack the immunity to fight off the new strain,” says Dr Novil Wijesekara, Head of Health at the Sri Lanka Red Cross.

Teams of Sri Lanka Red Cross volunteers have been supporting a large-scale government effort to stem the outbreak – providing patient care at hospitals and going door-to-door with public health inspectors to raise awareness about the disease, its symptoms and how to prevent its spread.

Volunteers have also been helping authorities to identify and clean sites where mosquitoes are breeding.

Today, the IFRC released new Disaster Relief Emergency Funds to the Sri Lanka Red Cross to vastly expand the response over the next six months, aiming to assist 307,000 people in the districts of Colombo, Gampaha and Kalutara where dengue is rampant.

In coordination with government partners, Red Cross teams are set to expand patient care at six priority hospitals and improve or install water and sanitation at nine medical facilities.

Additional teams of volunteers will be trained to identify and eliminate vector breeding sites, and then deploy to 72 vulnerable communities to lead household, school and community information and clean-up campaigns.

“The size of this dengue outbreak is unprecedented in Sri Lanka,” says Jagath Abeysinghe, President of Sri Lanka Red Cross.

“It will require a united front in support of the government’s prevention and control programme and committed community action to tackle it.”

Dengue is one of the world’s fastest growing diseases, endemic in 100 countries, with as many as 390 million infections annually, according to the World Health Organization.

“But the disease can be stopped in its tracks when affected communities are informed about prevention and treatment, have access to medical care, and mobilize to clean up their environment. That’s what our teams are focusing on.”

A mobile clinic set up by the Sri Lanka Red Cross in a church in Western Province’s Gampaha district to assist people suspected of contracting dengue, cholera and leptospirosis, all of which could be spiking after recent monsoon floods. On Monday the Red Cross announced a rapid expansion of emergency assistance to help contain what’s being called the country’s worst-ever outbreak of mosquito-borne dengiue fever. (Photo: SLRC via IFRC)