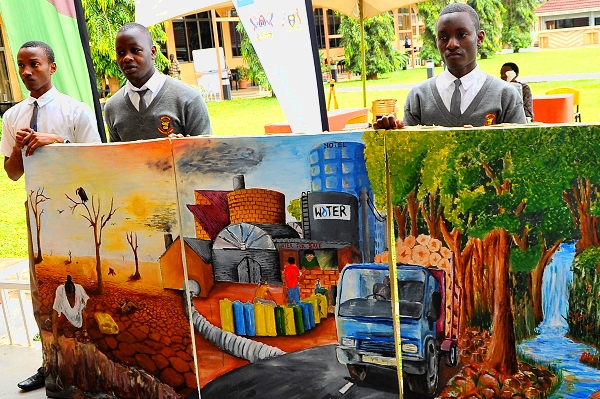 The eleventh international conference on community-based climate adaptation, ‘CBA11’, ending in Kampala last week heard a call for climate action to be rapidly “scaled up from tens of thousands of households to tens of millions”.

Saleemul Huq, Senior Fellow at the International Institute for Environment and Development (IIED), the organizers, said this would require enhanced collective action and advocacy with governments and international donors to scale up local-level adaptation.

He also emphasized the need to improve engagement with both policy-makers and practitioners.

This year’s conference, which drew to the Ugandan capital more than 300 participants from over 50 countries, “highlighted the benefits and challenges of using natural resources and ecosystems as part of adaptation work,” according to the IIED website.

The conference, hosted by the Ugandan government and the Makerere University Centre for Climate Change Research and Innovation, was opened by the Ugandan Minister for Water and Environment, Sam Cheptoris who stressed the dangers climate change posed to Uganda and said his government was responding, including with new legislation.

The International Union for Conservation of Nature presented a statement on behalf of civil society which called for local people to be placed at the centre of climate action, “predictive funding”, and private-sector involvement in leveraging resources.

The ICRC, Climate Centre and specialists working on the BRACED programme jointly facilitated a workshop on adaptation in fragile and conflict states, exploring the complex relationships between climate, livelihoods, migration and conflict.

Panellists included, among others, Mohammed Qazizada, a director at Afghanistan’s Ministry of Agriculture, and Wani Nelson Mogga, of South Sudan’s Ministry of Environment and Forestry; the session was covered by the Thomson Reuters Foundation.

The ICRC was represented by Kampala-based Jean Vergain, who supports the International Committee at regional level as a coordinator of water and habitat issues.

As part of its creative dissemination of information on flood preparedness, it also engaged young Uganda Red Cross volunteers in a flash mob, and together with the British Red Cross facilitated a ‘Y-Adapt’ interactive climate game for 150 youngsters.

Saleemul Huq, in a video interview, stressed three broad outcomes for the conference, starting with a “big emphasis on youth this time”, with Makerere University organizing a parallel event for young people.

A South-South universities consortium on climate for least developed countries was launched halfway through the conference, with the aim of eventually reaching nearly 50 LDCs.

And finally, he added, discussion about future of the CBA conferences themselves had generated “strong support to continue, but perhaps modify the format in terms of timing and venues”.

Full coverage of CBA11, including video of sessions and speeches, is available at the IIED website.

Students from Mengo Senior School used art to raise awareness about the climate issues that confront Uganda – a country with one of the youngest populations in the world – at CBA11, where there was a new focus on engaging the young. (Photo: FAO via Twitter)