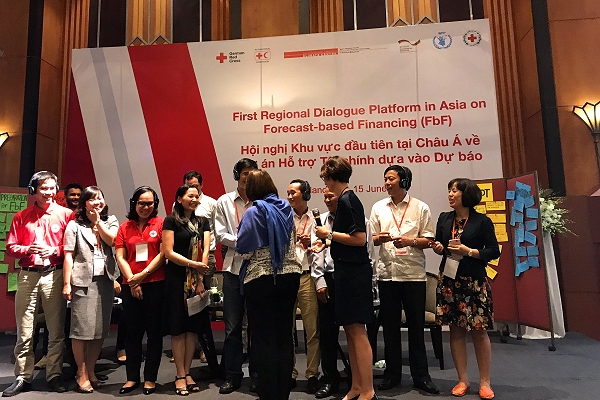 Two weeks after Bangladeshi coastal villagers in the path of Cyclone Mora got a humanitarian cash grant under German-supported forecast-based financing (FbF), the annual ‘dialogue platform’ for the innovative humanitarian model was this week held in Asia for the first time.

The three-day conference in the Vietnamese capital, Hanoi, was aimed at establishing a network of FbF stakeholders in high-risk areas of the Asia-Pacific region, convening scientists, practitioners and policy-makers to discuss the history and future of FbF.

The ‘First Regional Platform in Asia on Forecast-based Financing’ was opened Tuesday by Tran Thi Hong An, Vice-President of the Vietnam Red Cross Central Committee, and ended yesterday.

It marked the start of the second phase of FbF, which is supported by the German Federal Foreign Office and implemented by the German Red Cross (GRC) and the World Food Programme (WFP), with technical support from the Climate Centre.

‘After two consecutive dzud disasters in Mongolia,
it’s hoped FbF will drive preparedness in the country’

Verena Kresin, the GRC’s Head of Asia Unit, said that while Vietnam was one of the countries most affected by climate change, the government had “made remarkable progress [on] legislation and countrywide practical application of activities related to disaster risk reduction and climate change adaptation, together with major humanitarian actors like the Vietnam Red Cross Society,” the meeting’s hosts.

She added that the Hanoi conference was intended to build evidence that “FbF does indeed reduce the humanitarian impact of extreme-weather events [and to generate] interest and support from donor agencies and policy-makers.”

At the fourth dialogue platform in Geneva last December, Thorsten Klose-Zuber, from the Federal Foreign Office’s Humanitarian Assistance Unit, said it was “essential to bring other donors on board to enable humanitarian partners to act on forecasts, when funding might not have been available in the past”.

At least 14 National Societies were represented at the Hanoi dialogue platform – the fifth its kind globally since the inception of FbF, including, from the Asia-Pacific region, the Bangladesh Red Crescent and the Australian, Indonesian, Mongolian, Myanmar, Philippine and Vietnamese Red Cross.

In addition to WFP itself, UN specialists from the United Nations Development Programme and the Food and Agriculture Organization took part, as well as others from CARE International, Save the Children, and several IFRC offices in the Asia-Pacific region.

Pierre Kremer, the IFRC’s Kuala Lumpur-based Head of Partnerships for Asia-Pacific, highlighting the International Federation’s commitment to FbF, told delegates that after two consecutive winter dzud disasters in Mongolia, for example, the hope now was that FbF would help drive preparedness action in the country.

Some other agencies represented in Hanoi were the Vietnam Institute of Meteorology, Hydrology and Climate Change, and ECHO, IRI, PAGASA and SPREP.

For its part, the Climate Centre facilitated discussions on the relationship between FbF and high-level policy processes, and alliances such as the IFRC-led One Billion Coalition; it also shared first-hand experience from pilots in Bangladesh and the Philippines, as well as preparations for FbF in some Pacific islands nations.

In addition to the Red Cross Red Crescent, WFP has been a key FbF contributor and innovator over the past years; using forecasts to take action in the Philippines and Nepal has been one of their priorities, and their presence in Hanoi is seen as integral to a road map for the region.

The Climate Centre’s role in the second phase of FbF will continue to centre on technical support with both science and policy, especially through the Partners for Resilience alliance.

‘Team Vietnam’ wins an award for the best forecast-based financing intervention at the ‘First Regional Platform in Asia on Forecast-based Financing’, hosted by the Vietnamese Red Cross in Hanoi this week. (Photo: Isabelle Lacson/WFP Manila via Twitter)