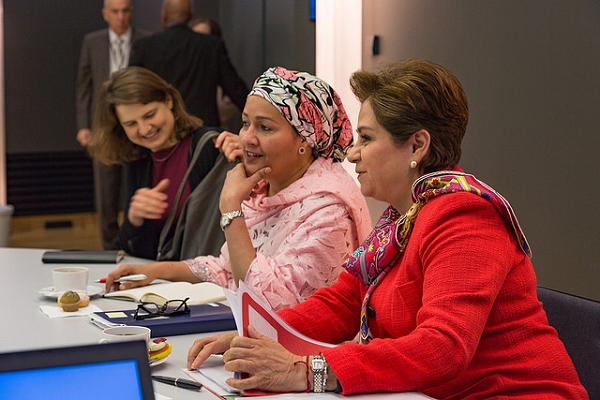 This year the UN Framework Convention on Climate Change (UNFCCC) meets twice in the city of Bonn, the former German capital by the Rhine. We’re all awaiting COP 23, with Fiji presiding over the annual high-level climate negotiations that garner international media coverage and, as often as not, high expectations.

Given that the small island state cannot accommodate the huge crowds these meetings attract, Germany has offered to host the tens of thousands of participants in November.

But over the past two weeks, Bonn was also the location of the technical meetings of the ‘subsidiary bodies’, held in between the high-level COPs. These are known to be technical and dry. And for some, just too slow-moving.

But this time, alongside the usual parallel technical tracks, we also saw a sharp change in the dynamic, marked vividly for me by UN Deputy Secretary General Amina Mohammed, a former environment minister of Nigeria, who told us: “We are the first generation to experience the impacts of climate change and…the last that can prevent a catastrophe for people and the planet.”

The arena in which she made these remarks was of significance: a session known, in classic UNFCCC jargon, as TEP-A, for ‘technical examination process on adaptation’.

However, that prosaic name captured an important new invention, a solutions-oriented process, mandated by the Paris agreement, to bring experts and stakeholder voices into the negotiations, in this case to find ways to integrate adaptation, the global goals for sustainable development, and the Sendai framework for disaster risk reduction, which is under review this week in Cancun.

Mohammed challenged negotiators in Bonn, and the states they represent, not only to live up to the Paris expectations, but especially to link the UNFCCC process more strongly to these other frameworks.

Her eloquent statement was, of course, intended partly for dramatic impact. But it also reflected a changing reality in the climate negotiations. When the Earth Summit in Rio de Janeiro negotiated the UN Framework Convention on Climate Change in 1992, climate was seen as a long-term problem, described in then-obscure terms like ‘greenhouse gas’ and ‘global average temperature’.

By the time the same states adopted the Paris agreement in 2015 – a mere 23 years later (even less than Mohammed’s “generation”) – climate change had become a much more urgent problem. Not just because we need to act soon to reduce emissions to avoid severe long-term consequences, but because we already see the impacts of climate change around us now.

Recent studies on attribution of extreme events underline how several climate hazards have already changed significantly, combining with a worsening trend in what humanitarians call the ‘vulnerability and exposure’ of people.

Deadly heatwaves, floods, and destructive storm surges linked partly to higher sea-levels – such as the one that followed Typhoon Haiyan in the Philippines – have been among the clearest impacts of human-induced climate change in the last few years.

This was the key element of Mohammed’s statement: full international recognition of the experience of climate impacts affecting real people, as Red Cross Red Crescent volunteers on the front line of such impacts see all the time.

Indeed, these climate impacts are part of the larger challenges of development: food, water, livelihoods, security – all at the core of both the global goals and the Sendai framework.

“As the effects of climate change increase, it will be increasingly important for countries to identify solutions and integrate approaches under different policy frameworks,” the UNFCCC said. Indeed so.

This week in Cancun, Mexico, the Global Platform for Disaster Risk Reduction is providing a health check on how governments are getting on with setting ambitious targets to reduce human and economic losses from disasters by 2030.

No pledges of large amounts of new government money are likely to emerge there, according to a Reuters analysis I’d be willing to bet is accurate. But the UNFCCC process should generate $100 billion of climate finance annually by 2020, with a good amount intended for adaptation and the most vulnerable people.

The onus, therefore, is on those involved in the UNFCCC to take advantage of the natural synergies between these processes; and for those in Cancun, and in several subsequent meetings on the global goals, to leverage the new-found appetite for integration of these agendas, and adopt the integrated approach that will offer the best value for money in tackling the rising climate risks.

A hazard mitigated today – perhaps banished altogether – is always less costly than one whose impacts must be repaired tomorrow.

In Bonn, countries offered very concrete examples of how this is moving ahead. We heard of Brazil’s Centre for Climate Intelligence for Agriculture that is working to reduce disaster risk faced by farmers. Egypt is using data on land degradation as a starting point for integrated action. The Japanese government is providing detailed information on climate impacts to nearly 50 prefectures for customized adaptation. And in the Pacific, national planning is helping communities address the hazards posed by rising sea-levels, salt water intrusion and disasters.

Out of these discussions in Bonn, I noted two especially important pieces of advice for countries and negotiators in the various processes.

One is to focus on local realities. When a flood hits a particular community, people don’t care if it’s due to climate change, and they care even less about whether a climate, disaster or development policy would remedy that risk. They just want a solution.

Local mayors, companies, and civil society organizations working at the local level – taken to scale in initiatives like BRACED and Partners for Resilience – have a much more integrated perspective.

In that local reality, the integrating concept is not climate but risk. This means looking at how changing hazards collide with human vulnerability to threaten development.

Delegates pointed to national adaptation plans as a vehicle for integration – and in the Red Cross we saw the value of that process in recent years when the Armenian, Georgian, Kenyan and Malawian National Societies brought their experience on the risks facing the most vulnerable groups into the climate planning process.

It’s important to note how much work is already underway that can justly give rise to some optimism. I sensed a distinct new vibe at this UNFCCC meeting: a coalescing of agendas, tighter bonding between the professional communities engaged (experts, national policy-makers, implementers and investors, as the UN characterized us), and a well of determination to scale the triple peaks of Paris, Sendai and the global goals. Climate change is a key threat to development.

For the UNFCCC, the highest ambition should be, in the language of the goals, leaving no one behind in the struggle to protect development gains and blunt risk.

Cancun will be a measure of how well we can all address both, and we should all bring those ideas back to Bonn in November, when the Fijian presidency is keen to make tangible progress on how to manage risk to the most vulnerable and make a difference in the real world.