Report: Poor management of water resources an overlooked cause of migration from Africa to Europe 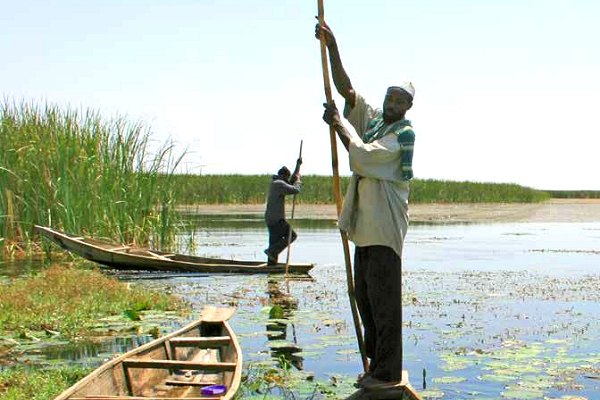 (This story appeared first earlier this month on the website of Netherlands-based Wetlands International, one of the five PfR agencies. It has been edited slightly here for length.)

Wetlands International launched a report at the Red Cross EU Office in Brussels [on 3 May], aimed at highlighting to policymakers the relationship between the health of wetland ecosystems and involuntary human migration in the Sahel region of Africa.

‘Water Shocks: Wetlands and Human Migration in the Sahel’ examines how poor water management leads to degradation of ecosystems, and is an overlooked cause of human migration, including to Europe.

Human displacement is a common situation in the Sahel region. For instance, around Lake Chad, the Boko Haram insurgency has displaced more than 2.3 million people since mid-2013, including 1.3 million children.

The Lake Chad Basin has lost 95 per cent of its surface area due to water abstraction for irrigation projects, and youths from this region are joining armed groups because of lack of opportunities.

‘Flood plains and lakes are disproportionately important,
especially to the most marginalized people’

“We need to understand better the complex and multifaceted drivers of involuntary migration, social conflict and poverty, which may be rooted in the depletion of natural resources.”

According to the UN, there are 20 million people in the Sahel who are food-insecure, mainly due to lack of water.

If development plans for hydropower and irrigation projects do not position ecosystems at the heart of national and regional development strategies, Europe and other nations will fail to achieve their goals for inclusive sustainable development and increased resilience to climate change.

By 2020 the European Union and the African continent aims to increase both energy efficiency and the use of renewables by building 10,000 megawatt of new hydropower facilities. These investments must assess the economic and social costs of environmental degradation.

“But this will only be achieved by shifting from the traditional development paradigms and hard infrastructure schemes which play havoc with the natural hydrology of the region.

“Maintaining and restoring the natural resource base is essential to increase water and food productivity and provide livelihood strategies to cope with a changing climate.

“In this context, wetlands such as river flood plains and lakes are disproportionately important, especially to the most marginalised and poor people of the region.”

The economic cost of losing the Sahelian Wetlands:

* The drying out and siltation of the Senegal river’s large coastal delta due to the Manantali dam has resulted in the loss of 90 per cent of its fisheries.

* The planned Fomi dam in Guinea could cut fish catches in the delta by 31 per cent and reduce the pastures by 28 per cent.

* Dams in northern Nigeria have reduced the Hadejia-Nguru wetland.