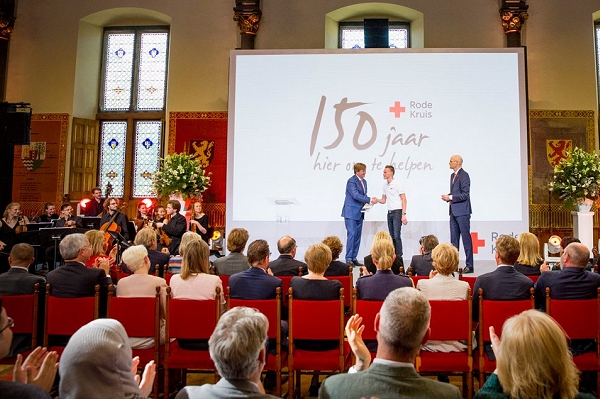 The Netherlands Red Cross Society (NLRC) celebrated its 150th anniversary on Monday – World Red Cross and Red Crescent Day, marked every year on 8 May – with a royal ceremony in the Ridderzaal in The Hague

It was attended by King Willem-Alexander and Princess Margriet, his aunt, who has been closely involved in the work of the Red Cross since 1966, most recently as NLRC honorary chair.

Some 450 invited guests were also there, including not only Dutch and international dignitaries but also many Red Cross volunteers.

“The Netherlands Red Cross since its birth has been close to the royal family,” an NLRC press release said. “For example, Prince Hendrik and Queen Juliana were chairs of the organization.”

The Dutch diplomat Sigrid Kaag, who is the UN envoy in Lebanon where the NLRC is active, gave a reading during the ceremony in the Ridderzaal – the ‘Hall of Knights’ in its English translation – used for the opening of the parliamentary year and other royal occasions.

This recalls that the Red Cross society in the Netherlands was established on 19 July 1867 when King Willem III signed a royal decree in Apeldoorn near the Loo Palace, a former country residence of the Dutch royal family.

The Netherlands was one of the 13 states or monarchies whose conference in 1863 gave birth to the international Red Cross.

The book also includes many personal stories of Dutch humanitarian workers through the history of the NLRC, which can now call on some 30,000 volunteers nationally and an online network of nearly 40,000 ‘Ready2Helpers’ who step forward during major domestic crises.

It often comes as something of a surprise when people learn that the Red Cross Red Crescent Climate Centre – a “Dutch idea”, as Ad van Liempt and Margot van Kooten put it in their book – did not just arise from concerns about big climate-related disasters overseas, writes Maarten van Aalst, its director, who was in the Ridderzaal on Monday.

After the deadly heatwaves in 2003 – the year after the foundation of the NLRC-hosted reference centre – and 2006, we struggled to convince our authorities that vulnerable, especially elderly, people would be at risk, and we needed to prepare.

This very timely book points out that even in the Netherlands – a country not usually associated with extreme heat, or at least not until we began to see a clear ‘climate signal’ in European heatwaves generally – older people need help to stay cool, and a nudge to drink six glasses of water a day in very hot weather (which is what I always tell my own grandmother, by the way).

This kind of life-saving community work can only be done with the help of voluntary organizations, of which the Red Cross is the leading example worldwide.

Hier om te Helpen also reminds us of the request by the 1999 International Conference of the Red Cross and Red Crescent, when Princess Margriet was chairing the Standing Commission, for a study on the humanitarian consequences of climate change.

Madeleen Helmer, our founder, then contacted the NLRC in 2000, when the United Nations Framework Convention on Climate Change met here, and began the process that led to the establishing of the Climate Centre.

Financing for adaptation in the most vulnerable countries was sensitive at that time, and focused only on the long term.

It took a while for science and policy to come to grips with the fact that extreme-weather events – heatwaves, floods, droughts, etc. now – constitute some of the most important impacts of a changing climate.

But we’ve progressed. In particular, the principle of ‘forecast-based’ readiness and action is now well established, not just in science and policy but also in practice: from the distribution of chlorine tablets ahead of a flood in Uganda to feed for alpaca goats in the Peruvian Andes.

I would claim, now I think with growing justification, that we’re dismantling the age-old relief paradox: that significant funding is only available when people are in really dire need – a transition that is even more important in a changing climate.

For this we must acknowledge our debt to Princess Margriet, who has been closely involved in the work of the Climate Centre from the start.

To her and in some small measure, at least, to Madeleen’s “Dutch idea”.

Dutch King Willem-Alexander receives his copy of the history of the Netherlands Red Cross, Hier om te Helpen, from Jordi Rijsdam, 16, one of its youngest volunteers, at Monday’s ceremony in the Ridderzaal. On the right is NLRC General Director Gijs de Vries. (Photo: NLRC)