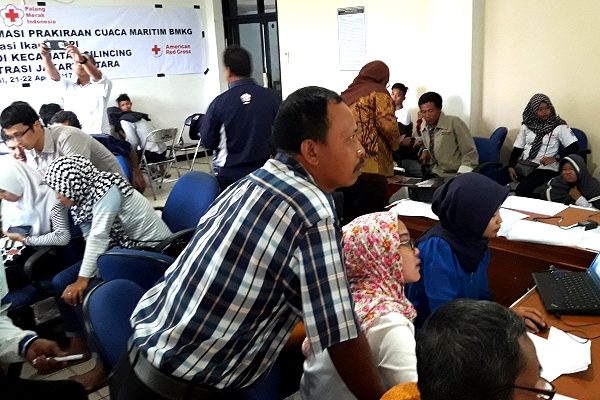 They are the everyday questions that face all inshore fishermen preparing to put to sea in small boats. What is the wind going to do? How high will the waves be? And what about the currents and the fisheries themselves?

There’s always tension between erring on the side of caution and perhaps losing income; or casting off in hazardous conditions that may overwhelm their relatively flimsy craft.

But now one group of fishermen from Cilincing, north of Indonesia’s capital, Jakarta, can do slightly better than the time-honoured scan of the horizon in the pre-dawn light and a finger in the air.

As part of an ongoing programme, ‘Greater Jakarta Resilience’, supported by the American Red Cross, the Indonesian Red Cross late last month provided computers and other assistance for a training workshop so they could familiarize with online government information about weather and fishing grounds.

Unpredictable seasons have caused confusion among communities on Indonesia’s many fishing coasts – sometimes leaving people at a loss to know when, or in marginal conditions whether, to set sail with their nets.

Yet it’s no disrespect to these highly skilled but traditional seafarers to say you need some degree of familiarity with online digital information to make the most of these invaluable resources; and a connection, of course.

Enter a PMI* team of youth volunteers, drafted in for the two-day workshop like youngsters the world over called on to help their elders with a fiddly download or plug-in.

They assisted 25 fishermen paired with a relative with a smartphone in a module on the use of forecasts, designed by the Climate Centre as part of its contribution to Partners for Resilience (PfR) work in Indonesia on strengthening civil society and assisting vulnerable groups. The workshop was organized by the PMI and the American Red Cross.

On first day, the groups explored traditional maritime knowledge on predicting the weather out at sea as well as current climate-related issues, and also how information about winds, currents and wave heights can help predict the state of particular fisheries.

That was followed by an introduction to the BMKG and MMAF websites, including how to interpret the colour codes and symbology, and guidance on reading official fisheries forecasts that use latitude and longitude.

“Our traditional knowledge can only predict a few hours in advance and for a limited area,” said Mr Madina, one of the fishermen.

“Sometimes we predict good weather, but only hours later the weather at sea is not good. The BMKG can provide forecasts for several days ahead, and also beyond our fishing area.”

A WhatsApp group has now been set up for support and general advice disseminated either directly on smartphones to the fishermen themselves or verbally via other community members.

The two Indonesian departments involved are joining forces with USAID’s project on climate adaptation and resilience in Indonesia, ‘APIK’, to discuss the possibility of adopting the forecast training module; a similar session is planned shortly in Kupang, capital of East Nusa Tenggara province, by PfR’s CARE and CIS Timor, which also partners Plan International locally.