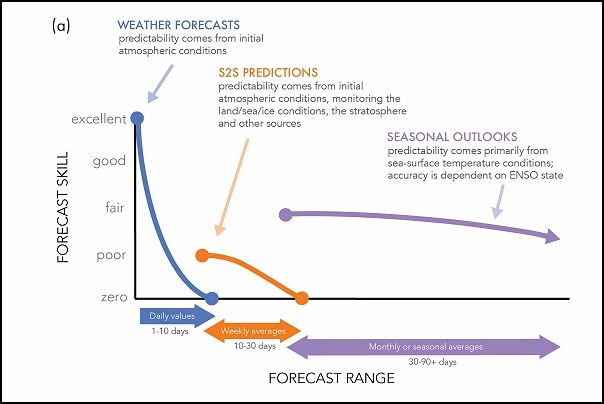 (This story appeared first yesterday on the IRI website. It has been edited slightly here. A detailed article written by the lead author of the S2S study was published last month by the Australian Energy and Water Exchange Initiative.)

For the first time a recent study has comprehensively reviewed the potential applications of subseasonal-to-seasonal (S2S) forecasts, and several affiliates of IRI were co-authors.

Andrew Robertson, one of the IRI co-authors,* said the paper provides a substantial overview of the progress achieved in S2S – i.e. forecasts issued with two-week to two-month lead times – over the last few years.

“It’s neat to see the concept of ‘Ready-Set-Go’ that IRI co-developed with the [Climate Centre] in the disaster risk reduction context being considered for application in other sectors, such as agriculture,” said Robertson.

‘We are seeing evidence of predictability
for heatwaves on S2S timescales’

Hannah Nissan, a postdoctoral fellow at IRI who was not on the paper, also sees promise for S2S applications in public-health actions related to heat.

“Heatwaves would be a great test case for an S2S early warning system,” said Nissan.

“Increasingly, we are seeing evidence of predictability for heatwaves on S2S timescales. Plus, there are many common-sense, low-cost and no-regret adaptation options for extreme heat, making it easier to justify taking early action.”

Nissan noted, however, that a forecast can only be effective when paired with a coordinated awareness campaign and engagement from a range of institutions and individuals.

“In many places, particularly in developing countries, we still need to raise awareness of the dangers of extreme heat and build the capacity to respond to a forecast on any timescale,” she said.

“I see these obstacles being the main challenges to getting the most out of skillful forecasts on S2S timescales.”

*Erin Coughlan, Manager, Climate Science, at the Climate Centre, was among the co-authors.

Graph shows assessments of the accuracy and reliability of forecasts (‘skill’) against their
range. (Image: IRI)