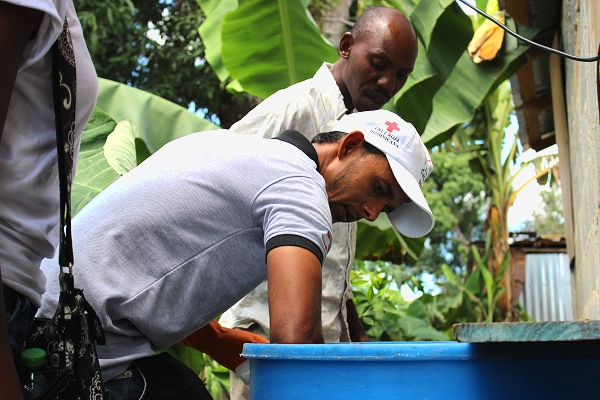 A new UN report is flagging increased risks to health from climate change and highlights the need for the world body and its partners to do more “to support governments to build climate resilience, including measures to protect human health”.

The comment is by Youssef Nassef, Director of the Adaptation Programme at the United Nations Framework Convention on Climate Change, quoted in a UNFCCC press release last week.

The report has been prepared in collaboration with the World Health Organization (WHO) and other agencies as part of the ‘Nairobi work programme’; it will be presented to governments at the Bonn climate change conference next month.

“The impacts of climate change on health are already evident, and will become increasingly prevalent,” a UNFCCC document summarizing the report says.

‘Climate stresses like heatwaves exacerbate
existing stresses within communities, such as poverty’

Climate change affects health directly through extreme weather like heatwaves and storms, and indirectly through natural disease-vectors such as mosquitoes as well as human-mediated systems like food production and livelihoods.

But due to the complexity of the various interactions involved, “there is no ‘one size fits all’ approach to health adaptation,” the synthesis document emphasizes.

It adds, however: “By 2030, conservative projections include worsening under-nutrition, malarial and diarrhoeal diseases, and heat mortality.”

Climate change lengthens the transmission season and expands the geographical range of many diseases, and even with “optimistic economic growth, at the global level, climate change will increase risks especially for the most vulnerable populations.”

Conditions favourable to the transmission of dengue fever, for example “are likely to expand significantly across the globe,” it says.

Diseases will not spread automatically “if public health interventions are utilized to protect populations, but their transmission will become easier as a result of climate change.”

The UNFCCC synthesis points out that without further research, it is not possible to definitively attribute health shocks to climatic factors.

But in late 2015 – in the midst of a strong El Niño – when reports emerged of a severe outbreak of Zika virus, it says, “climatic conditions in the regions affected were highly unusual and conducive to the spread of the disease”.

The UNFCCC report says the emergence of diseases and changes in patterns of distribution is jointly “one of the key issues of concern requiring new and innovative actions”.

Emerging vector-borne diseases mentioned most frequently in submissions to the UN from countries in Asia, Africa and Latin America include those spread by mosquitoes, particularly malaria but also dengue, West Nile fever, chikungunya, Ross River virus and the Zika virus.

Floods emerged as one of the main disaster impacts in the developing world, and drought was also a significant concern, particularly in Africa; in developed countries the main extreme-event mentioned to the UN was heatwaves.

The UNFCCC synthesis says: “Climate stresses like heatwaves exacerbate existing stresses within communities, such as poverty. The elderly are usually the most negatively affected.”

It’s also estimated that 22.5 million people are displaced annually by climate or weather-related disasters, a figure expected to increase in the future.

“Knowledge is key to disease prevention, and prevention is the best weapon available in the battle against health threats posed by Aedes mosquitoes, including Zika, dengue and chikungunya,” said Dr Julie Hall, IFRC Health and Care Director.

A volunteer with the Dominican Red Cross assists residents with measures to make domestic water tanks safe from the mosquitoes that spread diseases like Zika and chikungunya. The National Society and its community-based volunteers have been among those at the forefront of the fight to roll back Zika, one of the vector-borne diseases mentioned most often in submissions from Latin America to a new UN report flagging the health risks of climate change. (Photo: Miguel Domingo Garcia/IFRC)