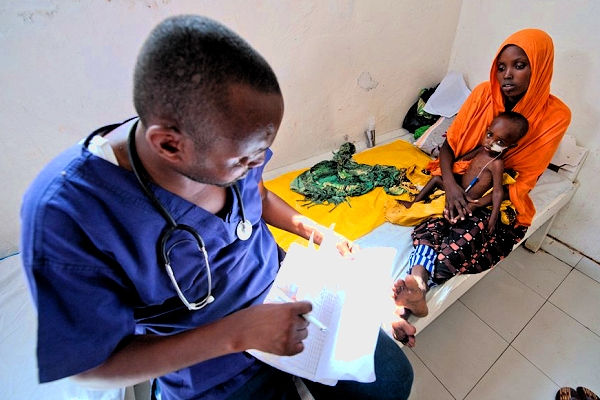 A ‘rapid analysis’ released last week by scientists with the World Weather Attribution (WWA) programme looks at the influence of meteorological drought – lack of rainfall as distinct from temperature* – and La Niña on the humanitarian crisis in Somalia.

The team did separate studies of Somalia and Somaliland, in the north-west, which have slightly different climates.

Last year’s spring rains were about 20 per cent below normal in Somalia – more in some confined local areas – and a little above normal in Somaliland; autumn rains failed in both, assessed as a ‘once in a century’ event in the latter but not as rare in Somalia.

The main rivers where people base their livelihoods – the Shabelle, the Dawa and the Juba – are very low or have dried up totally.

“The strong La Niña [Pacific phenomenon last year] increased the probability of a dry season and explains about one third of the precipitation deficit,” according to the scientists; over time, rainfall in Somalia especially and in Somaliland would be higher during El Niño and lower with La Niña.

Looking at the potential impact of climate change, the scientists conclude that the effect on the autrumn rains was small. “We cannot show that climate change influenced the probability of drought,” they write.

Climate Centre Director Maarten van Aalst, who took part in the work, adds that “while we cannot blame climate change for this drought, the study points out that the high natural variability of rainfall in Somalia could mask ‘fairly large underlying trends’.

“We just can’t be sure. The first-order humanitarian message remains that we must keep up the pressure to act earlier, be more agile, advocate for more flexible funding – all the more so in fragile, conflict-affected countries.”

After revision on 15 March, the IFRC’s emergency appeal has been nearly tripled to US$3.3m to support the Somali Red Crescent Society in assisting 150,000 people into next year.

“The planned response reflects the current situation and information available at this time…and will be adjusted based on further developments and more detailed assessments,” the appeal text said.

The IFRC says food security has deteriorated significantly across Somalia, with an increasing number of people facing increased death rates and severe impacts on livelihoods and assets – the third and fourth categories of the Integrated Phase Classification (IPC) of food security by area, ‘crisis’ and ‘emergency’ respectively.

The FEWS NET agency most recently in February warned the humanitarian community to expect the most acute, fifth IPC phase – famine – if the next rainy season is poor.

The ICRC said last month it was appealing for US$400m for humanitarian crises in north-east Nigeria, Somalia, South Sudan and Yemen: the International Committee’s Director of Operations, Dominik Stillhart, told a news conference in Geneva “a massive scaling up of aid was needed to avert a further spiralling downwards in these countries”, but there was still time to avert a famine in Somalia and Yemen.

Mohamed Gedi, supervisor of the stabilization centre at Kismayo hospital, examines the notes for 22-month-old Khalid Farah Aden. Supported by the Red Cross, the centre is one of the few places in south and central Somalia where malnourished children can be treated. (Photo: Pedram Yazdi/ICRC)

*The WWA scientists say temperatures in the region have been rising “roughly at the same rate as the global mean temperature”, but to confirm any impact on the drought they would need better data, a way to assess how temperatures affect water run-off and evaporation, and information on soil, plants and irrigation.