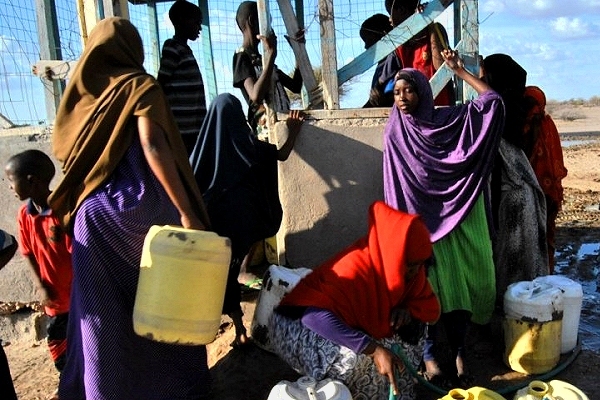 (This story is a press release from the Kenya Red Cross Society. It appeared first earlier today on the National Society’s Twitter feed.)

Climate scientists from several international agencies were ending a three-day conference in Nairobi today, releasing a detailed study of the Kenyan drought whose main message is: prepare for more.

The study says there’s a detectable ‘climate signal’ – a measure of the influence of human-induced climate change – in the atmospheric temperatures behind the drought.

Data indicates they were “higher than they would have been without the influence of climate change,” according to a summary of the scientific findings. The summary cites a January 2017 FEWS NET report saying recent “hotter than normal temperature accelerated forage and water depletion across most of the pastoral and marginal agricultural areas”.

The team, however, found no strong influence of climate change on rainfall in Kenya – regarded as the main determinant of surface water – but say they can’t exclude small changes in the risk of poor rains linked to climate change.

“We also looked at the influence of the Pacific El Niño and La Niña phenomena that would respectively increase and decrease rainfall in Kenya,” said Dr Friederike Otto, Deputy Director of the Oxford University Environmental Change Institute.

“Our findings indicate the 2016 La Niña diminished short rains in both regions.”

The scientists are part of the global World Weather Attribution (WWA) programme that assesses whether extreme climate-related events are more likely now than they would be in a world without climate change.

The WWA group, which for the Kenya study included the Kenya Meteorological Department (KMD), comprising the Red Cross Red Crescent Climate Centre and the Princeton-based Climate Central group, convenors of the WWA programme, as well as specialists from Melbourne and Oxford Universities and the Royal Netherlands Meteorological Institute.

The Nairobi conference wrapped up a year-long branch of the programme that also included the UK-based Climate and Development Knowledge Network, concentrating on several developing countries affected by climate-related disasters that may be intensified by human influence.

“The humanitarian logic of the attribution effort is that the better that can be understood, the better it can be planned for,” said Dr Maarten van Aalst, Climate Centre Director, who is in Nairobi.

“The techniques involved have improved rapidly in recent years,” he added. “Scientists can now do such analyses quickly, sometimes within days of an extreme event, using cutting edge computer-modelling and analysis of observations.”

“They can tell us how often these events typically occur – their ‘return interval’ – and if climate change is making them more or less frequent.”

As Kenyans wait anxiously for the next rainy season, in scientific if not humanitarian terms the drought that began last year is not yet as exceptional as the 2011 disaster in the Horn of Africa, whose ‘return interval’ the attribution scientists assessed at 1 in 50–60 years.

The KRCS has been implementing a number of interventions geared towards supporting the over 3 million people currently affected by drought in Kenya. The drought response initiatives include: cash transfers to improve the food security at the household level; destocking; food vouchers; implementation of health and nutrition activities; and water and sanitation.

“With the frequency of such disasters, it is time that we explore the link between climate and disasters and take timely action,” he added.

With the current drought ongoing and thus the increase in number of the populace affected, the priority is to work to reduce vulnerability both now and over time. The current long-rains outlook from the KMD shows ‘depressed rainfall’ over most of the country, especially the east.

The Nairobi conference ended with a high-level panel that included representatives from the Kenyan government and meteorological department, the KRCS, and the Climate Centre.

Women and girls fetch water at Saretho borehole in Garissa county, which serves a community of some 6,000 people and livestock from the surrounding area. Until 2014 it was powered by a costly diesel generator that often malfunctioned, especially in the heat, says Abdi Ibrahim, chair of the borehole committee. “During droughts we didn’t pump water often and most people used to drive their cattle for many kilometres,” he said. But then the KRCS installed a solar-power system that greatly reduced the cost of pumping water. (Photo: Anthony Langa’at/Thomson Reuters Foundation)