In drought-hit Kenya, slaughtering goats to save herders 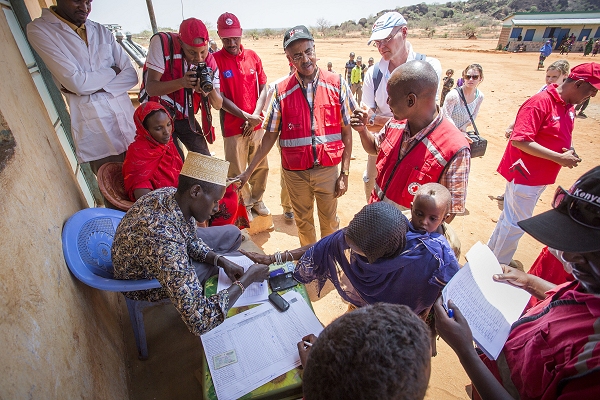 (This story appeared first yesterday on the website of the Thomas Reuters Foundation.)

In the scorching 40-degree Celsius heat of this village in northern Kenya, waiting residents take shelter under acacia and palm trees. A group of 30 men queue next to a pen holding about 50 goats.

In the middle of the queue is Mamu Yarra, from the nearby village of Sesi, who has brought a goat to sell today.

“Many of my goats have died because of lack of pasture. I have nowhere to sell them. And when they said the Red Cross is buying, I said I will sell to them,” said Yarra, his arms folded across his chest.

Twenty-five of his herd of 35 goats have already died as a result of drought in recent months, he said. But selling a goat for slaughter, as part of a ‘destocking’ programme to reduce the number of animals on depleted grazing land, could help him avoid more losses.

Some 2.7 million people across half of Kenya’s 47 counties have been affected by the drought, which the government recently declared a national disaster.

Failing rains have particularly hit livestock-herding communities, some of whom have lost their entire herds. Pastoralists like Yarra struggle to find buyers for the skinny remaining animals.

But a programme in Marsabit County that buys livestock that might otherwise die of starvation is helping preserve pastoralists’ main source of income.

The Kenya Red Cross, which manages the project that started in November, buys each goat or sheep for 2,000 Kenyan shillings (US$19.51) – about a third of the normal price for a healthy animal.

The Red Cross then slaughters the animals and distributes the meat to households designated by village leaders – including to the sellers themselves in some cases.

“By buying herders’ livestock we aim to give them the dignity of being able to buy their own food,” said Abbas Gullet, head of the Kenya Red Cross, at an event to launch the programme.

In a shelter near the pen in North Horr, four villagers hired by the Red Cross slaughter the purchased goats and hang the carcasses until they are distributed. The men keep a record of which community members pick up meat, so everyone gets a fair share.

Today, Yarra has been allocated one slaughtered goat to take home and divide between four households. “There are about 200 people in our village…so we’ll need to share,” he explained.

The destocking programme has been implemented in five Kenyan counties hit the hardest by drought, including Marsabit County.

Talaso Chucha, regional coordinator for the Kenya Red Cross, said the agency had so far bought, slaughtered and donated the meat of about 1,500 sheep and goats in Marsabit County.

“We will continue it in villages most affected by drought,” she said.

Gullet said the Red Cross decided to pay for the destocking programme rather than distribute food aid because it was both cheaper and less prone to mismanagement.

Residents in some drought-hit areas have in recent months accused local authorities of diverting food aid intended for hungry families to markets for resale instead.

Buying and slaughtering livestock, Gullet said, both helps farmers get some cash back from dying livestock and gives residents “a steady source of protein”.

The programme does not include help to rebuild pastoralists’ herds, however.

With the money Yarra receives from selling his goat, he aims to buy food such as flour, rice and cooking oil for his family.

But he wishes he could sell more animals. “The programme is only buying one goat from each of us, at the moment,” he said. “Some herders would like to bring cows but they [the Red Cross] are not buying them.”

The programme has opted to destock smaller animals in order to more evenly share limited funding between families and villages, officials said.

KRCS Secretary General Abbas Gullet (centre) with the visiting Director of the Netherlands Red Cross, Gijs de Vries, in Marsabit County last month, discuss the ongoing destocking programme with local Red Cross personnel and media. “We will launch a national campaign in the Netherlands in order to support drought-affected countries in Africa, including Kenya,” the KRCS quoted Mr De Vries as saying. The IFRC launched a revised emergency appeal for the Kenyan drought for more than 9m Swiss francs on 10 February; it is so far only 23 per cent covered. (Photo: Arie Kievit/NLRC via IFRC.