Smarter spending could tackle disasters in Uganda before they happen 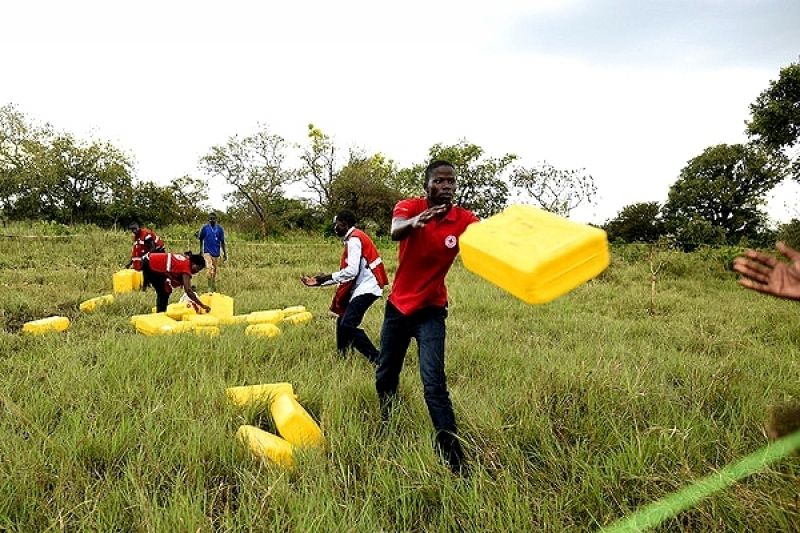 (This story appeared first on Friday on the website of the Thomson Reuters Foundation. The Climate Centre reported on both forecast-based financing operations in Uganda in November 2015 and April 2016.)

Every year families are displaced and crops destroyed in Uganda by torrential rains – and extreme weather events may be worsening as a result of climate change.

“If recent rainfall is anything to go by, flooding this year could start as early as April – with communities bearing the brunt of unpredictable weather patterns,” said Irene Amuron, a technical advisor for the Red Cross Red Crescent Climate Centre in Uganda.

But getting help to people before disaster strikes could help cut the growing costs of helping them after a crisis occurs, experts say.

The Red Cross has been experimenting with ‘forecast-based financing’ in Uganda and other countries.

That involves releasing funds or other assistance to communities according to pre-agreed triggers – such as weather predictions – rather than waiting for torrential rains or dry spells to cause havoc.

Such early aid can help communities prepare for a crisis and limit the damage it does, rather than simply try to recover afterward, Amuron said.

“This can include distributing chlorine tablets to purify water and bags to store food, as well as hoses to divert water,” she told the Thomson Reuters Foundation, pausing to listen to the grumble of thunder.

The Red Cross tested the mechanism in November 2015 after it received flood warnings for several villages in the eastern region of Teso from the European Commission’s Global Flood Awareness System. The warnings were confirmed by the Ugandan Met Office.

“We provided jerrycans and soap to about 2,000 people – not based on damage that had occurred, but on the potential impact of the flooding,” Amuron said.

She added that the flooding did occur in December, but no emergency response was needed thanks to the preparations in advance.

Helen Ticehurst, international development manager at the UK’s Met Office, said at a meeting convened by the UK-funded Building Resilience and Adaptation to Climate Extremes and Disasters programme that although early action makes economic sense, assistance money only tends to get released when a government declares an emergency – not when it issues an early warning.

Richard Ewbank, a climate change advisor at Christian Aid, explained that governments can be reluctant to put out early warnings about extreme events “as they often fear criticism if the forecasts turn out to be wrong”.

Amuron said that the second time the early-aid mechanism was triggered in Uganda, in April 2016, the warning turned out to be a false alarm. But the work to prepare for the disaster still had benefits, she said.

“The trenches that were dug still channelled water into gardens whenever it rained, and soap we distributed still improved people’s personal hygiene,” she said.

She added that the risk of false alerts made the Red Cross consider primarily “low-regret” early actions.

“So instead of suggesting that people relocate or uproot their crops in anticipation of a flood – which can be both expensive and an inconvenience if the alarm turns out to be false – we might show them how to divert water,” she said.

Communities involved in the early-aid trials now understand that an alert may not always lead to an extreme event, Amuron said, but are prepared either way.

The effort to prepare ahead of time for disasters aims to teach actions that communities can eventually carry out on their own, said Amuron, like building raised grounds with sticks to protect crops from flooding.

“Our (Red Cross) presence then wouldn’t even be needed. We could just share the weather information we receive with the community,” she said.

The Red Cross is working with Uganda’s government to expand the mechanism – which has also been tested in Togo, Mozambique and Peru – to other parts of the country, including to tackle drought in the north-eastern Karamoja region, she said.

Amuron said the mechanism aimed to complement existing government initiatives and forecasts, not replace them.

“I think that other governments and even the private sector will ultimately buy into the concept,” she added. “Early action is cheaper and effective.”

People living in rain-swept Kapelebyong sub-county getting humanitarian supplies from Ugandan Red Cross volunteers in November 2015 in the first for-real distribution by the Red Cross under forecast-based financing. Flood warnings for several villages in the eastern region of Teso had come in from the European Commission’s Global Flood Awareness System and were confirmed by the Ugandan Met Office. (Library photo: Denis Onyodi/Climate Centre)